Eagles May Be The Only Team Dumb Enough To Trade Away Their Future For Deshaun Watson, Who Could Miss The Next 2 Seasons, Minimum 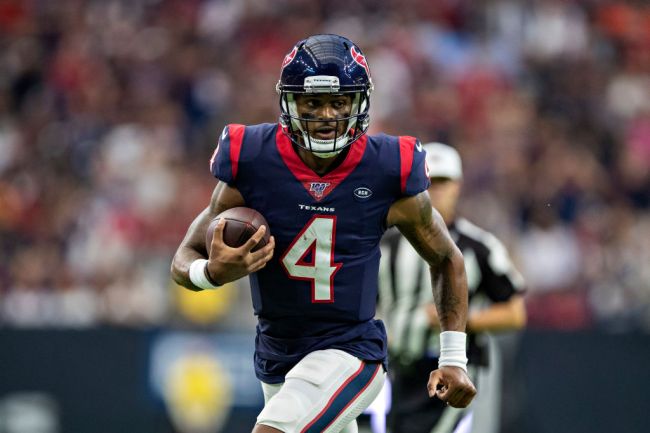 Deshaun Watson demanded a trade out of Houston at the start of the NFL offseason. Watson wanting to be dealt from the Texans has taken a bit of a backseat in his world, however, due to the ongoing legal battles he continues to face, but with the regular season fast-approaching, Houston appears to be all-ears on the trade front.

Houston’s asking price for Watson is at least three first-round picks and more. NFL insider Chris Mortensen has even reported that the Texan’s asking price is some combination of five high draft picks and starting-caliber players.

There are only a certain number of teams around the league on the lookout for a QB to begin with, and an even smaller group of teams with that sort of future draft stock that could pull off this sort of deal. The Broncos and Dolphins have been rumored to be interested in Watson, but the Eagles may hold the strongest cards to make a move.

Eagles’ sideline reporter Howard Eskin thinks there’s a 90 percent chance the team acquires Watson because they have three first-round picks they can offer.

“The Eagles have the three first-round picks, and that’s what they’re gonna have, and this is the prediction I’m going to make: based on the information that I got, when — and I’ll say when — he is traded, I think there is a 90% chance that he will be with the Philadelphia Eagles,” Eskin said on SportsRadio 94WIP. “And just based on all the information that I’ve gotten, that’s what I’ve come down to.”

Why Trading For Deshaun Watson Is An Unbelievably Risky Move

Watson is a three-time Pro Bowler and will turn just 26-years-old in September. He’s undoubtedly one of the most talented players in the entire league and should carry those sorts of hefty price tags, but his baggage far outweighs anything else at the moment.

Giving up three first-round draft picks and starting-caliber players for a guy that most likely won’t step foot on an NFL field for the next two seasons is an extremely bold move, regardless of how great Watson is.

In late June, Watson’s attorney Rusty Hardin shared that the NFL had not yet interviewed his client about the sexual assault allegations from 22 women that led to a civil lawsuit. There is an extremely high chance that Watson will be suspended by the NFL after a court ruling and with the slow-moving legal system, seeing Watson play by the 2023 season could honestly be a stretch. Watson missing just two seasons could very well be a best-case scenario as well.

Given the uncertainties around Watson’s future, his value has never been lower, but it could take an even larger dip down the line once some sort of decision is made on the legal side of things. Expecting a Watson trade to happen sooner rather than later is probably a mistake, but then again the Eagles have the assets it could take and may pull the trigger on a quarterback that may not play for two seasons.

The NFL is a ‘what have you done for me lately’ league and if Watson does end up in Philly, all he would have done for them over the next two seasons is essentially nothing at all.