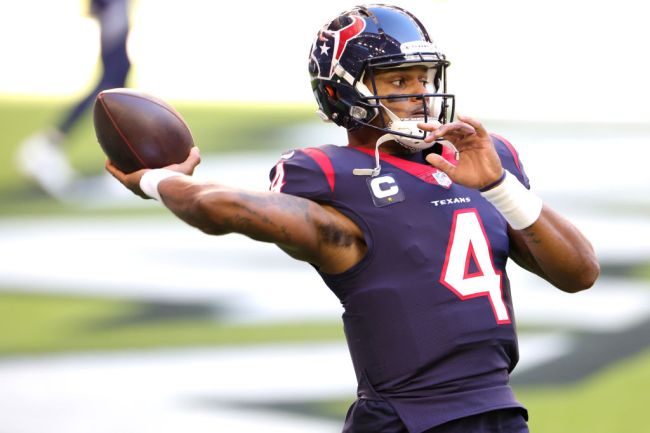 The Houston Texans are finally open to trading Deshaun Watson but it’s going to cost a team an arm and a leg.

Over the weekend, Watson showed up to Texans camp to protect his contract and make sure he didn’t get fined despite threats earlier in the year that he was going to sit out unless he was traded.

Quarterback Deshaun Watson will report to the #Texans today to avoid being fined $50K per day during their training camp, according to a source. Watson’s trade request remains in effect with source saying nothing has changed in that regard.

QB Deshaun Watson still wants #Texans to trade him. He has no-trade clause in his contract so he and his representation would be directly involved in any such eventual move if it happens. So far no team has asked he waive the clause to accommodate a potential trade.

A day after Watson showed up to camp, NFL Network’s Tom Pelissero and Ian Rapoport are reporting that the Texans are now willing to listen to trade offers for Watson but the asking price is at least three first-round picks and more.

The #Texans are now willing to listen — and have been for some time — to trade offers for star QB Deshaun Watson, multiple sources tell me and @RapSheet. But the price is high for a player of his caliber, and should be. It’d likely take at least three first-round picks and more.

When he reported to camp Sunday, Watson was respectful, but his demeanor reiterated he doesn’t want to be in Houston. The question is, will a team step up with the type of massive offer that would compel the #Texans to move him now? Watson also would have to waive his no-trade.

ESPN’s Chris Mortensen says he’s heard from league executives that the Texans are asking for five high draft picks and starting-caliber players in exchange for Watson.

For Deshaun Watson, the @Texans price has been some combination of 5 high draft picks and starting caliber players, per two league executives.

The big elephant in the room that may scare away teams is the fact that Watson is still facing 22 sexual assault lawsuits that will not be cleared up for some time unless he settles out of court. There’s also still a possibility Watson gets suspended by the NFL under their personal conduct policy.

Deshaun Watson showing up for camp and not immediately being placed on paid leave hardly resets the clock to before the filing of the first lawsuit when it comes to determining fair trade value. 22 lawsuits are still pending, and the criminal investigation has not been closed.

Unless the Texans can spark a bidding war for Deshaun Watson's contract, they don't have the leverage to be making huge demands. He wants out, he's still facing 22 lawsuits, and at some point he quite possibly will be suspended without pay, under the Ben Roethlisberger precedent.

We’ll have to wait and see if any team bites on a Watson trade before his lawsuits are cleared up.