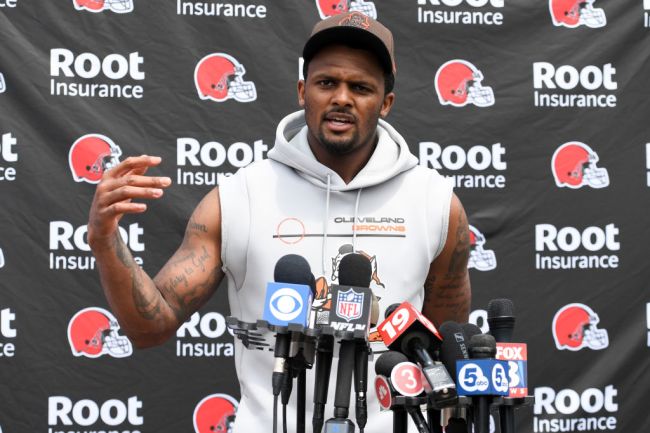 On Tuesday morning, it was reported that embattled Cleveland Browns quarterback Deshaun Watson has reached confidential settlements with 20 of the 24 women who are suing him for sexual misconduct. Given the undisclosed nature of the settlement, monetary figures have not been made public. The settlements come just a few weeks after the 23rd and 24th lawsuits against Watson were brought on by new accusers.

Deshaun Watson: “I am going to continue to fight and clear my name.”

Deshaun Watson has reached confidential settlements with 20 out of the 24 civil lawsuits that were filed against him#PMSLive pic.twitter.com/qSIP2XvUbl

I don't expect settlements will impact NFL's investigation / impending decision, but it does wrap up Watson's legal issues. https://t.co/cf16ZhycPP

Settlement of all Deshaun Watson cases is the only way to put this behind him. Returning to field will be quickest way to ‘clear his name.’

"I just want to clear my name," Deshaun Watson said in a June press conference.

🚨BREAKING NEWS🚨 –> Deshaun Watson has settled 20 of the 24 civil suits against him, according the attorney Tony Buzbee, who said terms will remain confidential:#NFL #Browns pic.twitter.com/797TzKshpX

NFL 100% told Deshaun "if you settle, this is your suspension number" benefits both Watson and league to get this behind them. Guarantee that is the case

The narrative around the Deshaun Watson cases will go like this, because this is how it ALWAYS goes:

1) Let's wait for all the fact to come out at trial;

and then, once the cases have settled & there's no trial:

2) the accusers have moved on, why can't you?

You trust the NFL to fairly adjudicate Deshaun Watson's case? It can't even get one of the most prominent owners to appear before Congress to answer for the documented and appalling workplace issues in his franchise.

Regardless of the settlements, the NFL still looks bad if it doesn't ban Deshaun Watson for the entire 2022 season. Otherwise, it's "another rich athlete paying his way out of trouble" in the court of public opinion & another weak decision by the NFL pertaining to abusing women.

So much for DeShaun Watson saying “I don’t plan to settle. I plan to prove my innocence.” Dude is a sexual predator. https://t.co/sM2qz0W98B

Deshaun Watson is taking the field for the Cleveland Browns this season.

To anyone who is saying as to the Deshaun Watson cases that there is no evidence he did anything, only the complaints from the women who say he did something, you don’t really know what the word “evidence” means.

Watson, of course, sat out the entire 2021 season due to the allegations and was traded from the Houston Texans to the Cleveland Browns as a result of the controversy surrounding him.

Tony Buzbee, the lawyer representing some of the women suing Watson, released the following statement:

“Ashley Solis [the first woman to sue Watson] is one of the heroes of this story. Her case has not settled and thus her story and that of the other three brave women will continue. I look forward to trying these cases in due course, consistent with other docket obligations and the court’s schedule,” the statement reads in part.

The consensus in the NFL community seems to be that Watson’s settlements won’t have any impact on the NFL’s possible suspension of the 26-year-old signal-caller. With training camps set to begin in July, the league will likely announce its decision before then.

Watson’s future also impacts the future of Baker Mayfield, who remains in virtual NFL purgatory as the Browns await the NFL’s decision regarding their new quarterback.

RELATED: The Texans Might’ve Traded Deshaun Watson But They’re Still In The Thick Of His Lawsuit As The Organization Will Be Named As A Defendant