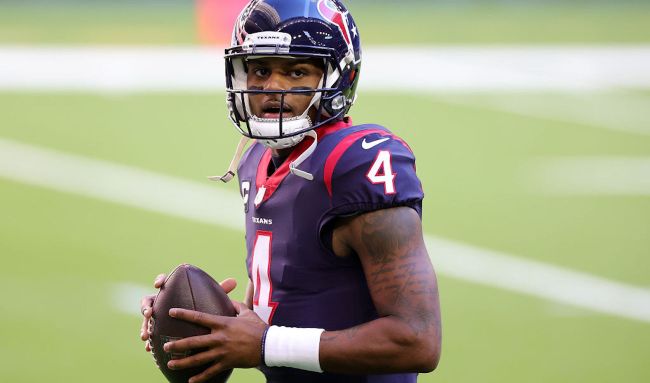 While the Houston Texans may have gotten Deshaun Watson off their books, they haven’t gotten the controversial quarterback out of their hair, as reports indicate the organization is set to be named as a defendant in the civil suit being brought against the 26-year-old.

The decision from Buzbee comes after a New York Times report alleged that the Texans enabled Watson’s alleged behavior. The Times reported that over the course of 17 months, Watson met with 66 different massage therapists and that the Texans enabled his behavior by allegedly “providing the venue” for some of Watson’s appointments and with a nondisclosure agreement that he gave to one of the women who is now suing him.

Attorney Tony Buzbee, who represents the 24 women who have sued Watson for sexual misconduct during massage therapy sessions, issued a statement on Wednesday indicating that he will add the Texans as defendants to the cases, along with others. [via ProFootballTalk]

Buzbee also released a statement about the decision to name the Texans organization as a defendant in the lawsuit:

“Based on what we have learned from the Houston Police Department, we will soon be joining the Houston Texans organization and others as defendants in the ongoing lawsuits against Deshaun Watson,” Buzbee said.

“Our team has thoroughly vetted each case. We are considering many others. These women are the true heroes in this sordid story. What has become clear is that the Houston Texans organization and their contracting ‘massage therapy company’ facilitated Deshaun Watson’s conduct. In many of these cases, the Texans provided the opportunity for this conduct to occur. We believe the Texans organization was well aware of Watson’s issues, but failed to act.

This decision from Buzbee will likely only ratchet up the pressure on the NFL to make a definitive decision on Deshaun Watson’s future — a future that the Cleveland Browns recently committed nearly a quarter of a billion dollars to.