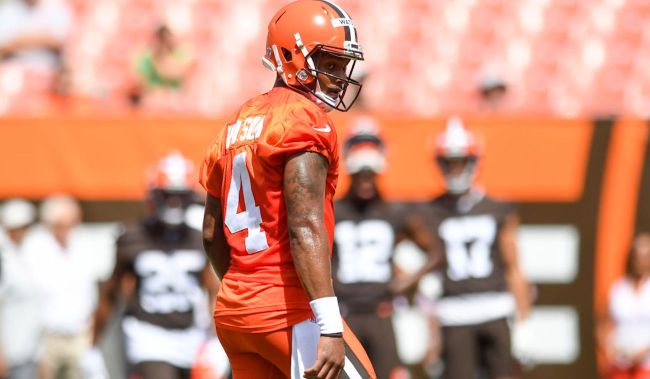 At long last, the NFL’s suspension of Deshaun Watson could be announced any day now, at least according to a new report from ProFootballTalk.

As detailed by PFT’s Mike Florio, a league source has told him that the Cleveland Browns are “bracing” for the 26-year-old Watson to be suspended for eight games this year. Given that the Browns handed Watson a FULLY-GUARANTEED five-year, $230 million contract, the organization will likely be thrilled with their future franchise QB only missing half of a season.

Per a league source, the Browns privately are bracing for an eight-game suspension of Watson. That obviously doesn’t mean anything as to the eventual outcome. It only means that the team has come to the subjective conclusion, one it would never admit publicly, that it expects to not have Watson for eight of 17 games in 2022.

The next question becomes whether they’d fully entrust the starting job to Jacoby Brissett for those eight games, or whether they’ll try to acquire someone else. [via ProFootballTalk]

Following their acquisition of Watson, the Browns eventually shipped former franchise QB Baker Mayfield — who they selected with the #1 overall pick in the 2018 NFL Draft — to the Carolina Panthers for a mere a fourth- or fifth-round pick in 2024.