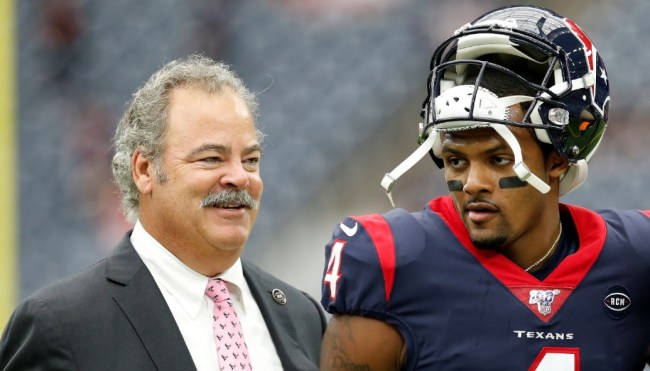 The Deshaun Watson situation in Houston is starting to get ugly.

On Sunday, ESPN insiders Adam Schefter and Chris Mortenson released a bombshell report that reveals many inside the Texans organization believe Watson has played his last snap in Houston after team owner Cal McNair angered him by repeatedly ignoring his recommendations for coaching and front-office hires.

Multiple people in and around the Houston Texans organization believe Deshaun Watson has played his last snap with the team, sources told ESPN’s Adam Schefter.

Watson is still upset with the Texans over, among other issues, the process they used to hire general manager Nick Caserio, according to multiple sources, leading to widespread speculation that Houston could trade the star quarterback this offseason or be faced with the real possibility that he could decide to withhold his services and not report if he isn’t dealt.

There’s a pretty startling quote in ESPN’s report that says Watson would only consider returning to Houston if McNair fired himself.

Former Texans receiver Andre Johnson weighed in publicly this past week, tweeting that Watson should “stand his ground” and calling out executive vice president of football operations Jack Easterby.

But a source close to Watson told ESPN’s Chris Mortensen that firing Easterby would not resolve the issue, saying that “Cal McNair would have to fire Cal McNair.”

It seems like the Dolphins could be the frontrunners to land Watson if he does get traded because he is said to like the “culture” in Miami.

There is a growing consensus within the NFL, according to Mortensen, that Watson will force his way out, and the Texans believe he will command a high compensation package in a trade.

A source close to Watson told Mortensen that the Dolphins remain prominent as an acceptable landing spot because the quarterback likes the culture he has observed under Miami head coach Brian Flores and there is no state income tax in Florida.