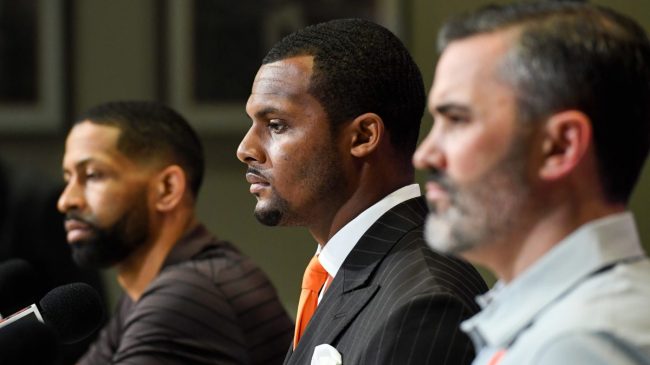 The star passer’s long list of accusers has grown to nearly 30 over the offseason with new allegations continuing to come in. The Cleveland Browns opted to sign Watson to the largest contract in NFL history despite the 22 pending accusations at that time.

The team said they’d done their due diligence on the quarterback before extending their offer, but with information coming forth, Watson’s future in Cleveland has become murky.

The NFL had nearly wrapped up its initial investigation into Watson, and they seemed ready to hand down their ruling over the summer. The league has since been forced to backtrack on that decision as new details in the case continue to emerge.

Now, it seems that the Browns could have to wait out a decision on their prized signal caller until the start of the season, which could put the team in a bind, especially if they get rid of Baker Mayfield.

Breer says that the NFL will likely be patient as new information continues to come forth. He says that he believed the original decision would come out around the July 4th holiday, but that the new cases have postponed a ruling.

Bottom line, it behooves the NFL to have as much information as it can before making a ruling, and, if you presume the league can’t have him out there early in the season, there’s still flexibility to wait a little longer without materially changing anything.

I thought before the new cases were filed and the Times report ran that the league would probably wait until July 4 weekend (which is after the discovery deadline) to drop the news. The latest developments, and this is just me talking, make me wonder whether they might just decide to give it until the start of training camp to play it safe.

And if the NFL wants to use that time, even if it makes it uncomfortable on teams other than the Browns trying to prepare for the season, then I really do get it.

With the new info, Breer says that this could stretch out until training camp, which would make things difficult on both the Browns and their opponents.

Until the NFL does come down with its ruling, it appears as though Cleveland is moving forward with their newly signed passer.