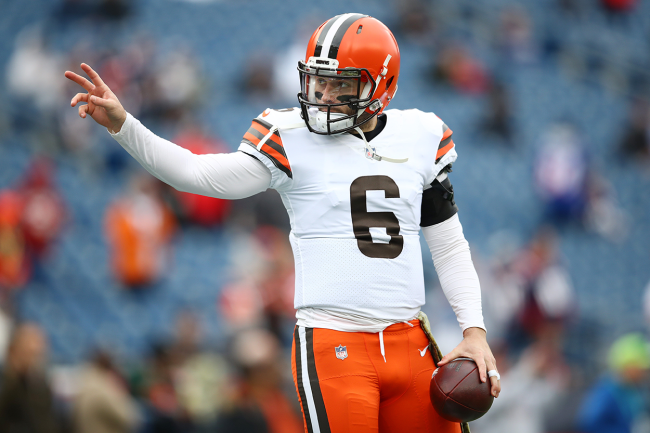 It has been 89 days since Baker Mayfield publicly requested to be traded out of the Cleveland Browns organization. He has not been traded.

As a result, the saga continues. It seems to be something of a waiting game at this point.

The team recently excused Mayfield from minicamp, which means that he is not with the team as practice continues in Cleveland. Meanwhile, the Browns appear to be operating as if Deshaun Watson will be on the field this fall, despite the recent, negative updates to his ongoing legal battle and NFL investigation.

However, Watson may not end up playing in 2022. If that happens, the team might choose to turn back to Mayfield and reports have said that is an option.

But will Mayfield willingly suit up for Cleveland if that ends up being the case? Nobody knows.

In the meantime, all that can be done is wait and see if the Browns will keep Mayfield, cut Mayfield or trade Mayfield.

Per a recent report from Cleveland.com’s Terry Pluto, the third option is still very much on the table, if not likely. He says that one team in particular remains very interested in a deal for the former Heisman Trophy winner.

“I’m hearing the Browns and Carolina are still talking about Baker Mayfield. No matter what Carolina claims, the Panthers must know Sam Darnold is not close to the answer of being their quarterback,” Pluto wrote.

In addition, Pluto said that Mayfield returning to Cleveland is not in the cards.

In addition to Pluto’s report, CBS Sports’ Jonathan Jones provided an update on Tuesday morning. He says that the Browns and the Panthers are working to get a deal done, and there is urgency on behalf of the latter to get something done with training camp underway.

However, as has been the case since the trade talks began, Carolina wants Cleveland to pick up more of Mayfield’s contract.

There's urgency on Carolina's side to execute the deal soon so Mayfield can get some time in minicamp with the Panthers. For the Browns, it's the best offer they have. Talks ongoing.

As Jones reported, the Browns do not have many suitors for Mayfield. And of the teams that are interested, the Panthers are way out in front.

There is a lot of time for things to change, but as of this moment, if Mayfield is to be dealt, it seems like it would be to Carolina.