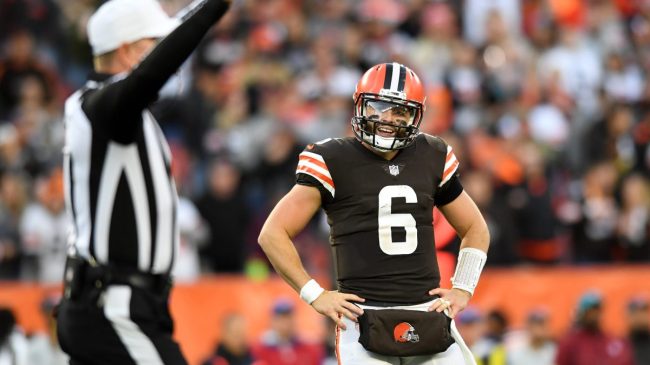 The team swung and missed with a number of notable suitors over the offseason after deciding to move on from the former No. 1 overall pick. Instead, Cleveland will hope that Deshaun Watson can take over, though his pending sexual assault case has provided uncertainty for his status in the 2022 season.

The fallout from the Watson acquisition was tough to watch. Mayfield essentially cut ties with the organization, penning a cryptic letter to the Browns’ fanbase when the news broke. A rift soon built between he and front office management.

Not surprisingly, Mayfield wasn’t in attendance for the team’s voluntary offseason workouts.

With the NFL Draft through, and most of the movement done on the quarterback market, there were a few final opportunities for Mayfield to find a new squad.

One of those was with the Carolina Panthers.

The two sided actually began negotiations of a trade, but apparently, what the Panthers were asking was more than the Browns were willing to give up.

For that reason, the deal fell through. Now, we know just what was demanded in order to get the signal caller to Carolina.

When the Browns and Panthers negotiated a potential Baker Mayfield trade last month, the Panthers reportedly wanted the Browns to pay $13-14M of his $18.8M salary. https://t.co/PvyFE0GPKN

According to a report from the Charlotte Observer, Carolina was asking Cleveland to pay nearly 75% of his guaranteed salary. The Panthers were asking for $13-14 million of Mayfield’s $18.8 million contract to be left with the Browns.

Cleveland wouldn’t budge, and when those talks stalled, the Panthers decided to take quarterback Matt Corral in the NFL Draft.

Now, the Browns are stuck with Mayfield for a little bit longer. They’re holding out hope that another team takes a chance on the passer. If not, things could get awkward in Cleveland.