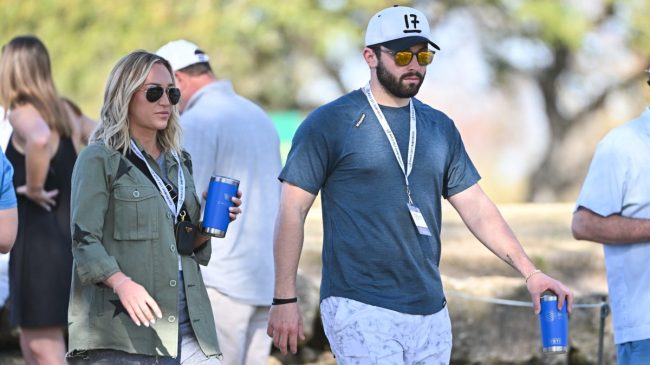 Baker Mayfield’s time in Cleveland is all but done.

While the quarterback remains on the roster, he’s made it abundantly clear that he has no intention of suiting up for the Browns in 2022.

The relationship was severed earlier this offseason after Cleveland pursued Deshaun Watson. The team ultimately chose the troubled star over their former No. 1 pick in Mayfield, leading the passer to cut ties with the organization.

Since then, he’s penned a goodbye letter to the fanbase, been trolled by teammates, and gone after the front office on their handling of the Watson acquisition.

With the rift between Mayfield and the team, it’s no surprise that he wasn’t invited on the team’s trip to the Bahamas last week. Instead, it looks like he was in another location, possibly meeting with his next potential team.

It’s also no surprise that he wasn’t in attendance for the team’s offseason workouts. Mayfield chose not to show for the voluntary OTAs, which shocked absolutely no one.

In fact, the fact that someone took the time to report the obvious news led to a hilarious response on social media.

Fans react to Baker Mayfield not showing at Browns OTAs

Adam Schefter reported the news that Baker Mayfield would not be attending OTAs and the response on Twitter was hysterical.

On a related note, my buddy Mike won't voluntarily attend his ex-wife's wedding

The “breaking” news had everyone questioning whether this even need to be said, but at least the sarcastic response was entertaining.

Mayfield is still waiting to find out where he’ll spend his 2022 season, but it most certainly will not be spent suiting up for the Browns.