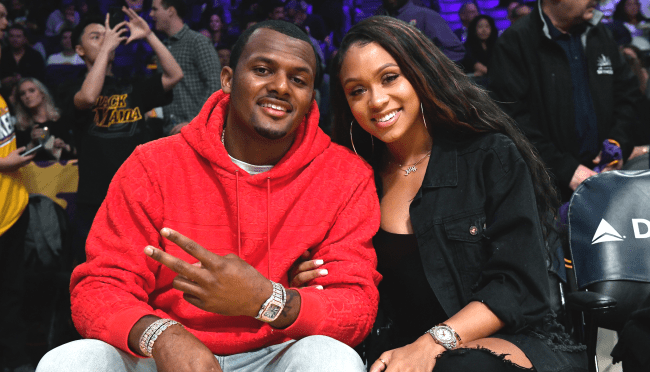 While the rest of the world appears to have turned on Houston Texans star Deshaun Watson in the wake of over 20 women claiming to have been sexually harrassed or assaulted by the quarterback, his girlfriend, model/actor/singer Jilly Anais, is defiantly showing off how strongly she is sticking with him during his ongoing massage scandal.

So far, at least 22 women have accused Watson of sexual misconduct, some of which his lawyer Rusty Hardin admitted he did have sexual encounters with, though all of them were supposedly consentual.

“Were there consensual encounters? Yes,” Hardin admitted on Friday.

“On some occasions, some sexual activities would have taken place,” Hardin replied. “I’m not going into what it is, or the nature, or the numbers, or with whom but I think you can rightfully assume that.”

Related: Deshaun Watson’s Lawyer Claims Several Accusers Told Others They Wanted To Get Money Out Of Watson In New Court Filing

None of this appears to be bothering Watson’s girlfriend of the past couple of years, however, as Anais shared several photos of a vacation getaway she and Watson took together over the weekend, including one photo of the quarterback with his arms around her on a jet ski and while she flips the double bird to the camera (swipe through to the last photo).

Perhaps the double middle finger was in response to all of the negative and crass comments she has been receiving on social media since Watson’s masage scandal hit the news.

After that athletes bag..

Deshaun Thinking which person to book a massage with next pic.twitter.com/ku2tXXJV5n

Back in July of 2020, Anais posted a photo of the couple on a boat with the caption, “LoveBug, This year has been nothing but pure bliss! I love doing life with you.. You are my best friend, my pookie dookie, my motivation, my backbone, my happy place! I fall deeper in love with you every second of every day! I love you, I adore you and I can’t wait to continue building unforgettable memories with you.. 1 year down, forever to go! Happy Anniversary Baby.”

Apparently not much has changed, at least in her mind.