Lions Trick Chris Spielman Into Reading His Own ‘Ring Of Honor’ Announcement, It Will Make You Cry Real Tears 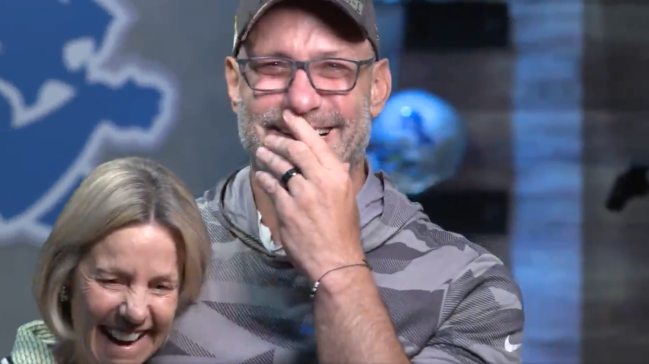 Former NFL linebacker Chris Spielman spent eight of his 12 seasons in the league with the Detroit Lions. And since 2020, he has served as a special assistant to the owner and CEO.

Now, he will be inducted into the team’s Ring of Honor.

The #Lions announced today that Chris Spielman will be inducted into the team’s Ring of Honor, the Pride of the Lions. Congratulations, Chris!https://t.co/MdXB0CpM6t pic.twitter.com/AA6JgEseH1

While the announcement itself is much deserved for the four-time Pro Bowler, the way in which he found out will give you goosebumps.

The Lions tricked Spielman into reading what he thought was some sort of promotion. He begins to read the prompter and doesn’t suspect a thing.

Meanwhile, Detroit’s principle owner Shiela Ford Hamp and her husband Steve are waiting behind the scenes. After Spielman stumbles through his first attempt, the prompter rolls back and he starts again.

“At halftime, we will honor one of the greatest Lions ever,” he reads. “A four-time Pro Bowl selection, he helped the team to four playoff appearances, two NFC Central titles and a birth in the 1992 NFC Championship game.”

You can tell that he begins to catch on to what is happening around the “two NFC Central titles,” but he doesn’t break character until he finishes the sentence.

“What are you guys doing here, man?” he asks, before reading that he will be inducted into the Ring of Honor.

Cue the waterworks. As Spielman begins to grasp what is happening, Shiela and Steve come out to congratulate him.

The entire thing is remarkable and it is entirely impossible to keep from tearing up as you watch Spielman’s reaction.

Spielman’s induction is extremely well-deserved and the way in which they told him was brilliant. Moments like this is what football is all about.