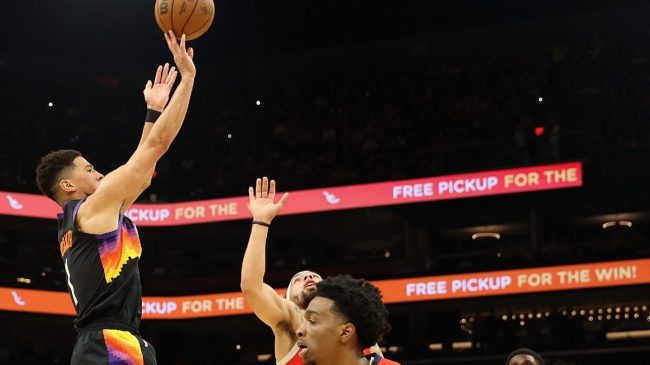 The Phoenix Suns are in a tied series with the eighth-seeded New Orleans Pelicans as they look to move on to the second round of the NBA Playoffs.

Phoenix took game 1 handily before falling to the Pelicans in game 2 on Tuesday. There were a couple of reasons for that defeat.

One might’ve had something to do with a certain referee that was on the Tuesday night crew, who seems to have it out for Suns point guard Chris Paul.

Another had to do with star guard Devin Booker going down with a hamstring strain, which will likely keep him on the sidelines for games 3 and 4.

While Phoenix may have lost game 2 due to Booker’s early exit, he was involved in a viral moment prior to his injury that took social media by storm.

Devin Booker Daps Up Baby After Draining A Jumper

Before going down with that hamstring injury, Booker had tallied 31 points in just 25 minutes of action. The sharpshooter was 12-of-19 from the field, drilling an absurd seven three-pointers in the first half of play.

Two of those 31 points came on an impressive fade away jumper that sent Booker sliding into the front row seats. After draining the difficult shot, the guard turned and dapped up a baby.

Devin Booker dapped up a baby after this shot. pic.twitter.com/HrZpAEY8R4

The reaction was hilarious, while the play seems to have become the norm for one of the NBA’s best scorers.

Hopefully, Booker is able to return sooner rather than later as the Suns continue their postseason run. The NBA Playoffs are certainly more entertaining when Phoenix is playing, and Booker is a big reason why.