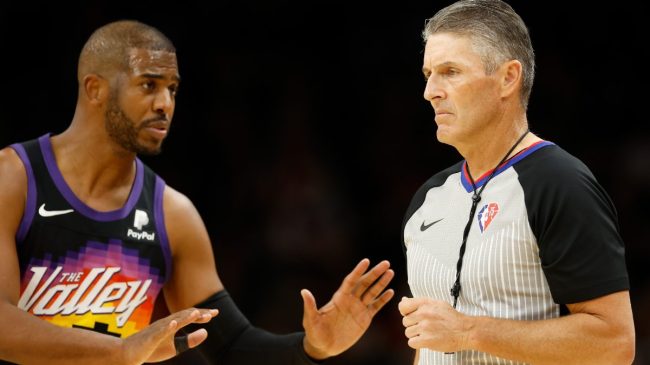 The Suns battled the Pelicans in NBA Playoff action on Tuesday night.

Phoenix is the top seeded team in the West, and they’re certainly favored to take the series and move on to the next round. After all, they did win an NBA-most 64 games in the regular season.

Unfortunately, there was one key circumstance working against the Suns, and more notably Chris Paul, in last night’s matchup.

Paul, a longtime NBA veteran, has gone winless in his last 13 playoff games with referee Scott Foster as part of the officiating crew. After last night’s loss to New Orleans, he’s now 0-14 in his last 14 games with Foster in the lineup.

This feud dates back to Paul’s time with the Hornets. Charlotte lost a critical game 7 against the Spurs that year with Foster officiating. Paul fouled out and the loss ended his season.

He then moved on to the Clippers, where he’d go 0-5 with Foster in the playoff lineup. A few more losses came as a member of the Rockets before Paul joined the Thunder.

In another game 7, Paul’s team lost with Foster officiating. Oddly, the referee reportedly reminded Paul that he was on the crew for that previous Hornets loss prior to the game.

Obviously, Paul lost that one, too.

The point guard is fully aware of the winless streak. He’s commented on the “coincidence” in the past.

With Paul losing a 14th straight game with Foster officiating, the NBA world hurried to social media to post their commentary. The Twitter reaction was absolutely hilarious.

Scott Foster when he gets to ref a game in the playoffs with Chris Paul pic.twitter.com/6CFZl2Z5sH

“Are you undefeated against Chris Paul in the NBA playoffs?”

Scott Foster when he gets put up against Chris Paul in the playoffs pic.twitter.com/QQgNXhlYgv

Paul is hoping that the Suns can get out of the first round without having to face a Foster-led crew again.