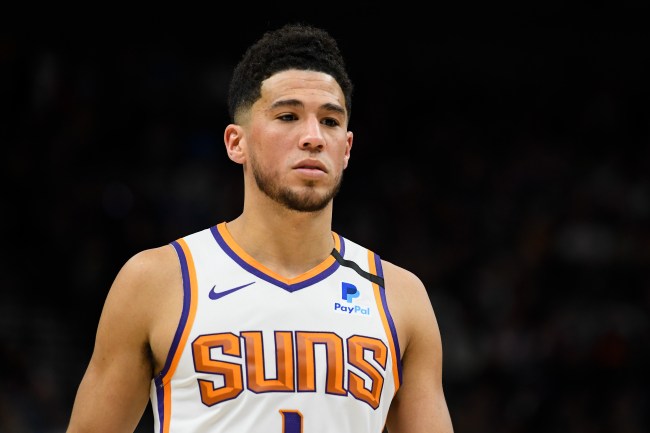 Devin Booker made his first All-Star team this season, has a career scoring average of 22.3 per game, once dropped a cool 70 on the road against the Celtics, and is still only 23 years old. The fact that this kid, with so much talent, is yet to be recognized as a superstar in the league is a disgrace — and the player’s dad, Melvin Booker, sure as hell isn’t happy with how his son’s career has gone to this point.

Although Devin Booker has been tremendous in his short time in the NBA, his Phoenix Suns teams have been anything but. They’ve finished with the No. 1 overall selection once (in 2018, which was used on DeAndre Ayton), and they’ve had a rotating carousel of head coaches, which has led to a ton of losing seasons and frustration.

With the lack of success, Melvin Booker reportedly talked serious crap about the entire Suns organization, with a shot at team owner Robert Sarver. Trevor Trout and Kameron Hay of Elite Media Group recently discussed how sick and tired the elder Booker is of watching his son waste away on a losing franchise like the Suns. Take a look below at his reported frustration.

Melvin Booker (Devin Booker’s father) is tired of watching his son go for a meaningless 26 a night just to get smoked habitually on Fox Sports Arizona. The Phoenix Suns pay the staff chicken feed, and the owner is clueless. Efforts to get Booker to the Knicks are very real. And it can happen because Leon Rose is that guy. Somebody taught Rich Paul the game. Don’t believe he doesn’t have tricks up his sleeves to get this done. But it’s deeper than the New York Knicks.

Those are some harsh accusations by Devin’s dad, and, if true, are a clear signal that the rising star is probably on his way out of Phoenix — with the New York Knicks rumored to be scheming something in order to land him, especially because Booker’s former agent, Leon Rose, is now the president of the Knicks. That’s something both Trout and Hay wrote about in their report about Melvin Booker.

There is no reason to believe Rose won’t use his leverage as the President of the Knicks. In fact, he probably would be doing himself a disservice if he didn’t.

Whether people want to admit it or not, big name agents are the new general managers in the NBA. Rich Paul has been evidence of such over the last couple of years.

Here’s one more wrinkle to all the anger and frustration from the Booker family towards the Suns: A report last year claimed the franchise refused to pursue Booker’s good friend, D’Angelo Russell, in free agency last season because they thought he’d be a distraction off the court to their young star. If true, it didn’t sit well with Devin Booker.

The Suns chose not to pursue D'Angelo Russell because they felt he wouldn't be a good influence on Devin Booker. https://t.co/AVwbrokixL

Following that report, Booker was unhappy with the Suns for not trying to add his friend (and fellow All-Star guard), per Ian Begley of SNY.

Booker, per league sources, wasn’t happy with the organization at the time of the report. The Arizona Republic noted that Booker had campaigned for club to sign Russell, who was a restricted free agent. The Suns instead pursued Terry Rozier and ended up signing Ricky Rubio.

Needless to say, given the Suns’ ineptitude over the past few seasons, it’s no surprise that both Melvin and Devin Booker are upset with the way things have gone in Phoenix to this point. Will that mean they’ll force a trade — and look to reunite with Rose in New York? It kind of seems like that’s the game they’re looking to play.