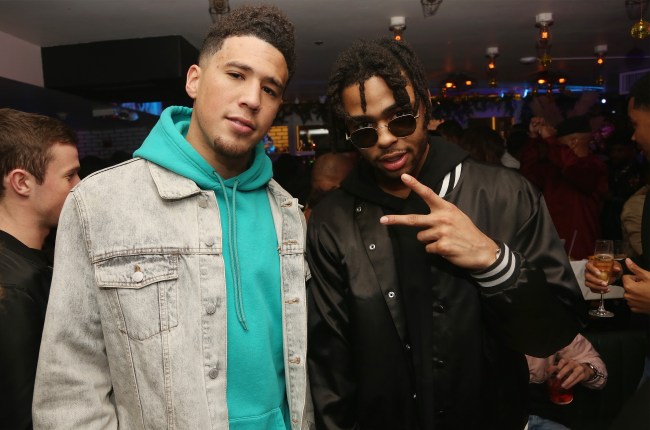 D’Angelo Russell inked a four-year deal worth $117 million with the Brooklyn Nets as part of a sign-and-trade that sent him to the Golden State Warriors — who may not be all that interested in keeping the 23-year-old All-Star point guard — but the former No. 2 overall pick may have been better off playing alongside another young star, Devin Booker, it wasn’t meant to be. While the Suns have been in the market for a point guard to pair alongside their scoring star, Booker, D’Angelo Russell didn’t get a sniff from Phoenix for a strange reason: because the team reportedly thought he’d be a bad influence on Booker, considering Russell has had a few run-ins with the law recently.

Yep, the Phoenix Suns are so dysfunctional that they refused to pursue an up-and-coming point guard because of a hypothetical feeling that Russell wouldn’t be good off the court for Booker, which is just insane. If you’re a Suns fan, you need to be pretty pissed off about this, because it’s one of those moments when you just shake your head while cursing the team. Here’s what a USA Today report said about the Suns’ decision.

A very vocal chunk of Phoenix fans wanted the Suns to go after D’Angelo Russell. The franchise apparently didn’t have the same feeling.

The Suns chose not to pursue Russell despite Devin Booker’s campaign for them to target his close friend, according to league sources familiar with the situation. The Suns apparently felt Russell wouldn’t have been a good influence on Booker off the court.

The appeal for Russell centered around his All-Star season and friendship with Booker. Booker said before the end of last season he planned on being more involved in the decision making process, but Suns General Manager James Jones made it clear before the draft who would have the final say.

“We have good discussions, but at the end of the day, Devin doesn’t desire to be a general manager,” Jones said. “He just wants to be a positive contributor to our team’s success.”

If true, the fact that Booker and D’Angelo Russell are friends has to make this even more frustrating for Suns fans. Even those who aren’t supporters of the team voiced their opinions, because Twitter blew up after hearing the report about the Suns’ reason for not pursuing the All-Star point guard. Take a look below.

I'm sure Josh Jackson is a good influence on him tho

Lolz. Yea DLo put a gun to his head and made him do this too. pic.twitter.com/Ilw6oPB5hb

If I'm Devin Booker, this is the que to gtfo now

I didnt know Devin Booker was still a teenager… pic.twitter.com/bWZGTNzGfv

Maybe they were afraid he would teach Booker how to win games?!?! 😂😂😂

Josh Jackson is getting babies high, but DLo would be the bad influence. James Jones is already the worst GM in the league!

THEY HAVE STILL GOT JOSH JACKSON ON THE TEAM.

Who knows if the Suns’ worries are warranted or not — after all, both D’Angelo Russell and Devin Booker are 23 and 22, respectively, so they’re both still just young kids. Still, with both already being in the league for a few years, it would seem less likely that they’d be immature off the court, with both pushing one another to reach their full potential on it. Sadly, unless the Suns try to pull off some trades to acquire Russell from the Warriors, we’ll never know how these two would mesh; which sucks as a hoops fan.