Sources: Warriors Have Absolutely No Interest In Keeping D’Angelo Russell, Is ‘Just A Matter Of When’ They Trade Him 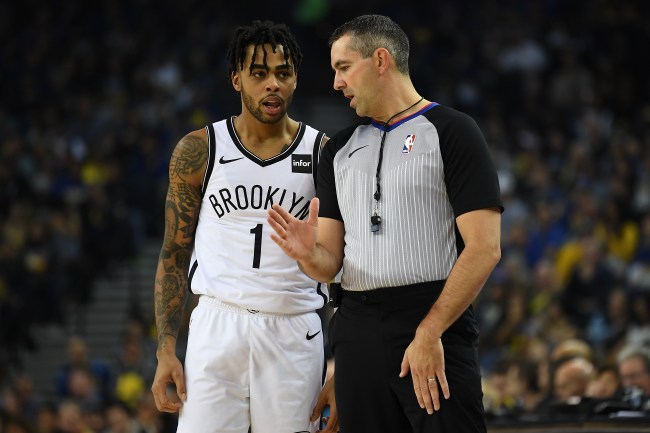 D’Angelo Russell being shipped to the Golden State Warriors in a sign-and-trade with the Brooklyn Nets probably caught the NBA world by surprise. It’s not that Durant, arguably the best player in the world, was being traded by the Warriors — that was something that had been talked about already — but that the Dubs landed a 23-year-old All-Star point guard in return. Adding to the shock value was that Russell plays in the backcourt, which is occupied by some guys named Klay Thompson and Steph Curry, meaning Golden State probably doesn’t have much use for the rising star.

Well, low and behold, that’s exactly what the team is thinking, too, according to the New York Times‘ Marc Stein, who said that, because of the crowded backcourt, D’Angelo Russell “doesn’t fit there (Golden State) whatsoever,” which will trigger a trade at some point. Stein says it’s not if, but when the Warriors will trade Russell.

“D’Angelo Russell doesn’t fit there whatsoever,” Stein said. “They just wanted to make sure they did not see Kevin Durant, arguably the best player in the league when healthy, walk out the door for nothing. They got a 23-year-old All-Star, and they will trade him. It’s just a matter of when.”

Appearing on the Dan Patrick Show to talk about the madness that’s become the NBA offseason so far, Stein gave some full insight on the swap between D’Angelo Russell and Kevin Durant, so take a listen to the segment below.

“They will trade him. It’s just a matter of when.”@thesteinline gives his take on Warriors/D-Lo 👀

While D’Angelo Russell did just ink a four-year, $117 million deal as part of the sign-and-trade between the Warriors and Nets, with Golden State maxing out and locking up Klay Thompson, it’s made D-Lo expendable. And, although Thompson’s going to miss most of if not all of next season while recovering from a torn ACL, the Warriors have a huge asset at their disposal now, which can bring back role players and only strengthen their depth — which is something that played a huge role in their first championship before Kevin Durant signed with them in the summer of 2016.

Many seem to be writing off the Warriors now that Kevin Durant’s gone, but with Curry, Thompson, Draymond Green and a championship culture, if the front office can parlay D’Angelo Russell into younger pieces who fit certain roles, the Dubs could be just as dangerous heading into next year’s playoffs, which speaks to the level of greatness they’ve built themselves into over the years.