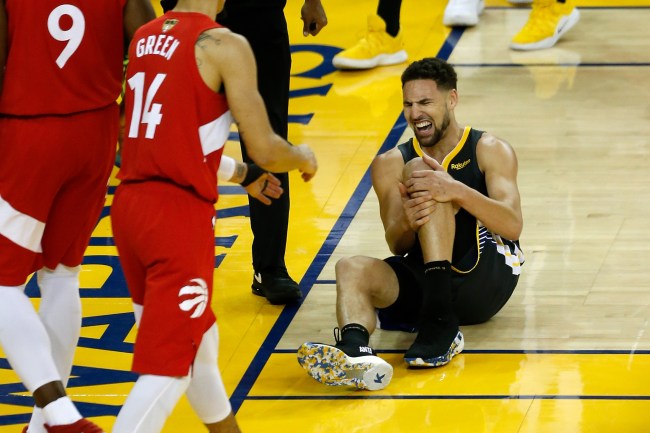 During tonight’s game 6 of the NBA finals, Klay Thompson was forced to leave the game when he awkwardly landed on his knee during a fast break late in the third quarter.

Thompson would later come back a few minutes later to hit two free throws before leaving the game again.

Steve Kerr said Klay Thompson told him on his way off the court: "Just a two minute rest and I'll be ready." Next thing Kerr heard Klay was done for the night, crutching out of the arena.

Even if Warriors are able to keep Klay Thompson and Kevin Durant in free agency, it'll be a fight to reach playoffs in the Western Conference. Thompson's ACL rehab could take him into February or March — and Durant likely misses entire season. Devastating turn of events. https://t.co/xKXayv9p34

Eight-ish months for an ACL tear, on the very low end recovery wise, is mid-February. Gotta figure Klay Thompson is out until at least the All-Star break, if not all next season.

The Twitterverse was impressed with Klay’s courage to come back into the game despite having a torn ACL.

Klay Thompson walked back on the court with a torn ACL and knocked down both free throws. LEGEND. pic.twitter.com/0lKKtYZd9i

Like Kevin Durant, Thompson was expected to be heavily courted by teams this offseason but now we’re going to have to wait and see if anyone wants to risk signing him longterm with a torn ACL.