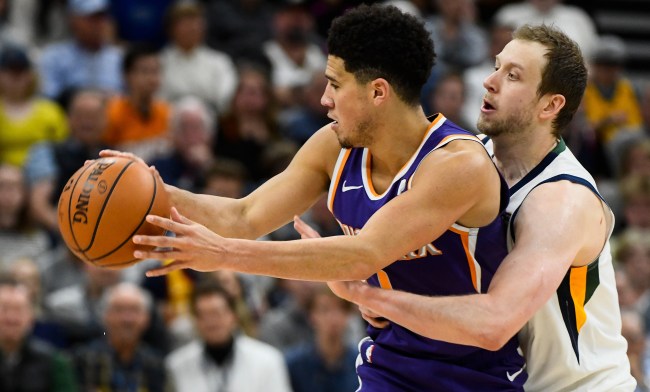 In what many NBA fans are calling a petty move, the Utah Jazz, up 33 points 125 to 92 at the time, mind you, fouled a Phoenix Suns player to stop Devin Booker from scoring 60 points on them Monday night.

God, the NBA is so much like a real life soap opera.

At the time of the foul, sitting at 59 points, Booker was already just the second Suns player in the history of the franchise to have multiple 50-point games – Tom Chambers being the other.

So with just a few seconds left in the fourth quarter, and the Suns having literally no chance to win, Booker was looking to back up his 70 point effort in 2017 by getting to 60 in this game.

The Jazz, though, they weren’t having it, intentionally fouling Suns forward Ray Spalding with 18.9 seconds left in the game, preventing Booker from achieving the milestone.

D-Book is the fourth player in NBA history with multiple 50-point games before turning 23 🔥 pic.twitter.com/A9sD0jwCW8

The Jazz intentionally fouled so Booker couldn’t get another bucket 😬 pic.twitter.com/7xgGjTbfN1

Love the announcer’s take, even if it is homerism at its finest, “Why don’t you man up? See, for me? It’s like, oh all of the sudden now you want to be creative to stop. No. Why don’t you put your best defender on him, and let Devin go one-on-one, and see if he can stop him? That to me is more impressive than triple teaming.”

Many folks outside of the Jazz locker room agreed that it was a pretty lame move by the Jazz.

Softest move there is

Soft and Petty smh. Let him be great they already won for crying out loud

Now that might be the best question of them all.