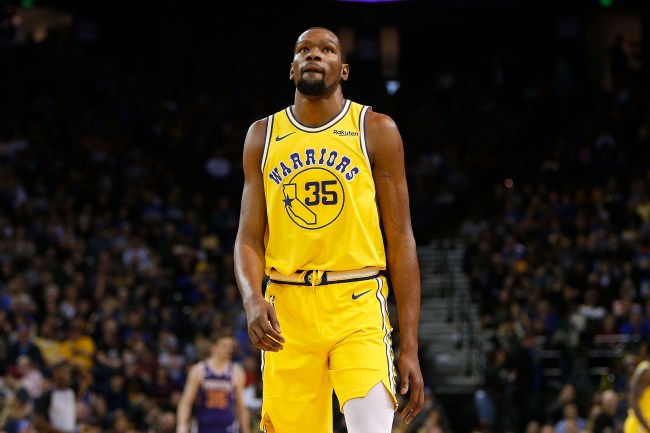 Kevin Durant’s one of the best basketball players on the planet. Thing is, he’s also one of the most sensitive, too. Even if someone just started watching the Golden State Warriors star this season, one could tell that Durant is high strung, emotional and prone to snap at any minute — just look at some of his extreme reactions after being asked simple questions by the media. For some reason, the dude just doesn’t have thick skin.

That sensitive side of Kevin Durant is, presumably, why many thought he created social media burner accounts a couple years ago, with hoops fans and the entire Internet cracking up that this guy, who’s one of the top three people on the planet to do his job, needed to disguise himself from fans in order to see and reply to trolls. But, according to Durant, the burner accounts weren’t meant for all that.

In a recent episode with ESPN+’s The Boardroom, the two-time NBA champ said that he created the burner accounts as a way to talk to friends privately, making sure some of his social media thoughts weren’t taken out of context and such. Here’s how Durant described the strategy.

"I try to live a normal life out in the public …"

OK, sure, whatever the guy says. But… well, hold on one second, let’s take a quick look at how Kevin Durant’s burner accounts even became unmasked; which happened when he, seemingly, forgot to switch accounts from his verified one while tweeting negative sh*t about his old Oklahoma City Thunder team in 2017 after he was a member of the Warriors.

That’s a serious rookie mistake; especially by a pro athlete on social media.

Thing is, Kevin Durant didn’t stop there, because during an interview with GQ‘s Zach Baron in 2017, he actually called bluff on ever even having a burner account to begin with.

“The Internet was alive with a gleeful debate about whether Durant had a second, secret Twitter account. That wasn’t the case, he told me. He did write the posts, but on his own account, he said. He described it as a dissociative episode: He woke up from a nap, and ‘it just felt like I was on the outside looking in at a conversation. I had to walk in and just be like, ‘Nah.'”

It seems as if Kevin Durant continues to flip-flop on the whole social media burner account topic, unsure of the right way to answer the question about them being real or not. Or, more so, if they are real, why does he have them? The guy just seems too caught up in his own head at times about this type of stuff. It’s social media, man, people are going to talk sh*t, so deal with it.

The good news for Durant is that, even with all the jokes about him, he’s still gone out and dominated on the basketball court. So, whether he’s secretly replying to people on social media or not, he’s not letting the negative trolls impact his game.