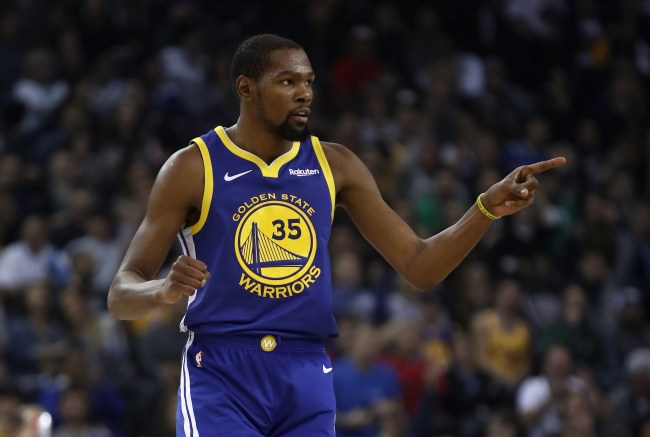 Kevin Durant has had one crappy week, guys. Not only did he and his teammate Draymond Green get into a highly publicized fight last week during a game against the L.A. Clippers — which resulted in a lot of he said, he said, as well as a suspension for Green — but KD’s Warriors are in the midst of one of their worst patches since the former NBA MVP joined the team in 2016, losing four of their past five.

We’ve all heard about how sensitive Kevin Durant can be, even creating burner accounts on social media to reply to fans and other hate thrown his way, so seeing a video of him cussing out a Dallas Mavericks fan isn’t really much of a surprise. But it is fun to watch because, well, anytime a pro athlete lets an annoying fan get into his head and shows that frustration, it’s entertaining. Take a look at the F-bombed interaction below, via The Hoop Central Twitter account.

Kevin Durant to a Mavericks fan
➖➖➖
“Watch the f—king game and shut the
f—k up”.pic.twitter.com/itQNPmCiyo

Aren’t pro athletes supposed to be above responding like this? If not, isn’t a guy like Kevin Durant supposed to be above responding like this? I’m not saying the fan’s right or wrong, but that dude can taunt one of the world’s best players as much as possible without crossing a line that would get him kicked out. To me, it’s just the latest example of Durant being a little bit of a baby.

With the Warriors struggling, Kevin Durant set for free agency next summer and him clearly showing signs of being a little bit of mental softness, it’ll be interesting to see how all this unfolds, because the Dubs have been the gold standard in the NBA over the past four years.