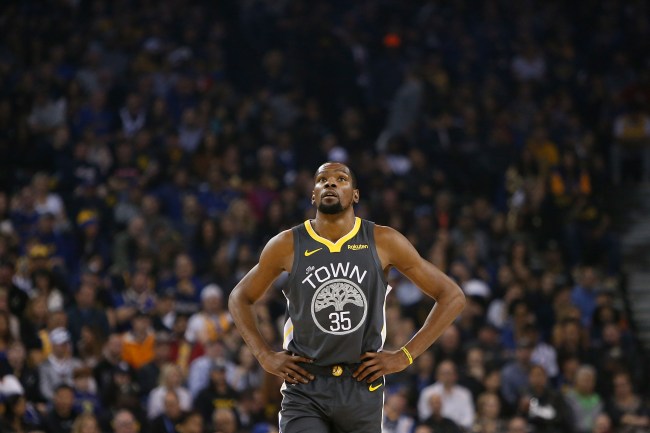 Kevin Durant is one of the more outspoken superstars in sports, typically telling reporters his thoughts without much hesitation. For some reason, though, the former league MVP and two-time NBA champ hasn’t spoken much, which prompted an article from The Athletic’s Ethan Strauss about what might be on his mind.

Could it be Kevin Durant’s upcoming free agency this offseason? Maybe it’s that he’s heated over something internally? Or could it be something totally unrelated to all of that? Since it’s him, there’s always going to be speculation — and Durant did his best to shut the media up about all the theories, completely laying into them following the Warriors huge win over the Spurs tonight.

Here’s video of Kevin Durant going in on reporters, via Anthony Slater’s Twitter.

Kevin Durant’s press conference, forcefully pushing back against the Knicks rumor and the media’s treatment of him pic.twitter.com/aqqbK7APh2

And, because that wasn’t even the entire press conference, here’s a transcript of the thing from Slater’s Twitter account.

The transcript of Kevin Durant's press conference tonight, pushing back against the recent media coverage around him pic.twitter.com/fMjg84G9HV

Whoa. Dude is clearly irritated by all the trade and free agent rumors floating around, and all the stories that get tossed and turned around about him from the media. The fact that Kevin Durant even goes as far as mentioning the New York Knicks by name and refers to the Kristaps Porzingis trade last week is a sign that something pissed him off.

Remember, this is coming off a game in which Durant dropped 23 points, grabbed eight boards, dished out nine assists and his team won handedly, 141-102, so it’s not as if he was just releasing some frustration over how he or the team played.

This is unlike Durant to go this apesh*t over speculation about where he might end up, but, hey, it makes for good theater, and, with the NBA Trade Deadline tomorrow, it’s a nice little appetizer for some of the potential madness we may be seeing. The NBA: Where amazing (drama) happens.