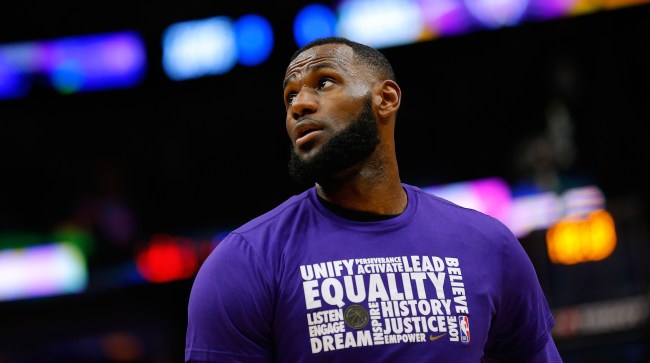 At this point the NBA might as well just go ahead and change its name to the NDA for National Drama Association.

So many of the league’s teams and players are mired in stories befitting a soap opera that’s it’s amazing anyone even notices that actual basketball being played.

Between the Knicks, the Pelicans, the Celtics, the Cavaliers, the Sixers, the Warriors, and, of course, the Lakers, definitely the Lakers, it’s just so much drama.

In Los Angeles, you’ve got LeBron calling out his teammates, the failed trade with the Pelicans, coach Luke Walton being on the hot seat, Magic Johnson’s tampering, and the circus that is the Ball family.

Out of all of that, the main focus of the drama in L.A. this year has pretty much been centered on LeBron James. And now one NBA executive says James has “killed” the Lakers’ chemistry. (Which I guess was thriving? before his arrival, what with the team going 126-284 over the past five seasons.)

Speaking anonymously about how James’ public courting of Anthony Davis affected the Lakers, the NBA exec said, via Bleacher Report, “He killed the [Lakers’] chemistry,” one NBA executive said. “He shouldn’t have been so public about it. Even during the All-Star draft, he laughed about [wanting Davis to be his teammate].”

In fact, things have gotten so bad in L.A. now as the team has gone 3-7 to fall to 11th in the West with a record of 29-31 since all of the Davis rumors started flying, Lakers fans are now on the verge of doing the unthinkable: burning their LeBron James jerseys.

Hosting a “Burn your LeBron jerseys” bonfire tonight at my house! HMU if y’all want in

The NBA, folks. More drama than The Young and the Restless.