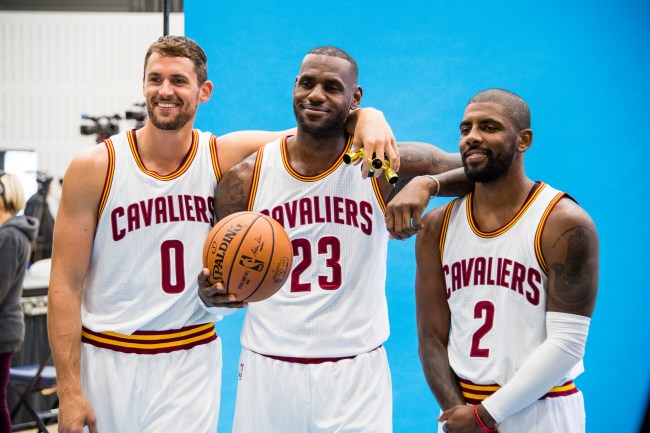 LeBron James and Kyrie Irving’s relationship has been classified as acrimonious since Kyrie succeeded in his quest to bail out of LeBron’s shadow in 2017. While it never reached KD-Westbrook levels of bitterness, it was obvious the two held harsher feelings about each other than they’d ever let on in the media.

That’s why it shocked the NBA world when Kyrie Irving admitted to calling LeBron after a bad Celtics loss in Orlando, a loss where Irving could be seen passionately arguing with head coach Brad Stevens and dressing down Gordon Hayward after a failed buzzer beater attempt by Jayson Tatum. Irving then publibly called into question the Celtics young guys’ being ignorant to the nuances of a championship team, the same guys who were one win short of a trip to the NBA Finals (without Irving and Hayward).

Kyrie felt so low about the way he acted that he called up LeBron James to apologize for his sophomoric behavior in Cleveland. Ex-teammate Kevin Love was reportedly with LeBron at a Los Angeles pizzeria when LeBron got the call and told The Athletic’s Joe Vardon how James reacted:

“LeBron looked down at his phone and he showed us,” Love told The Athletic, describing the scene. “He was like, ‘I wonder what he wants?’”

James returned Irving’s call in private. A source close to James declined to share what was said on the call but said LeBron was very appreciative that Irving called him. If their relationship was frayed, which the manner of their breakup in Cleveland says that it was, then some repairs are obviously underway.

Love revealed that playing with one of the greatest players to ever live has its challenges, and could empathize with how Kyrie handled his time in Cleveland.

“I think Kyrie went through some of the same struggles that I did,” said Love, who was 26 in 2014, when he and James and Irving joined forces. “There were some bad habits and maybe not knowing what it means to sacrifice and take a back seat to someone like a LeBron, who was trying to teach us how to win. I think I’m a much better player now, a much better teammate from having gone through it.”