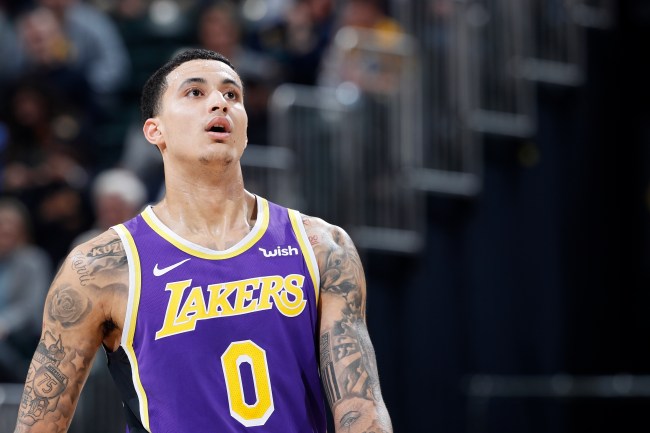 Kyle Kuzma is, arguably, the most talented young player on the Los Angeles Lakers. Sure, the team has other guys like Brandon Ingram and Lonzo Ball, among others, but the man nicknamed “Kuz” has a little bit of Klay Thompson in him, showing that he’s a solid piece for the team to try and build around in the next few years alongside LeBron James.

That said, Kyle Kuzma was one of the names mentioned in a potential Anthony Davis trade that had been rumored over the past few weeks, as the Lakers were basically offering their entire young core and a bunch of draft picks to land the superstar forward. The deal fell through, but the rumors about being traded seemed to have a serious mental impact on the young players in L.A., with the team showing signs of exhaustion by struggling since the Davis rumors started.

Following a huge performance against the Philadelphia 76ers on Sunday, in which he dropped 39 points, Kyle Kuzma talked about how the outside noise affected the psyche of both him and his teammates, finally admitting that some of the guys “kind of let it get to us.” Take a look below at Kuzma’s comments, per Harrison Faigen of LakersSBN.

Kyle Kuzma on the Lakers' conversation with Magic Johnson, and how they all need to be professionals even if they're in trade rumors (via @SpectrumSN): pic.twitter.com/QiFAI0CKOD

Pro athlete or not, it’s human nature to let rumors like that get to you, so Kyle Kuzma admitting it shouldn’t be taken as a sign of weakness. After all, most of these guys are 23 years old or younger, so that whole “part of the business” thing isn’t exactly engrained in their minds yet. Plus, when fans are doing anything they can to mess with players even more — like when Pacers fans chanted to Brandon Ingram, “LeBron’s gonna trade you,” that doesn’t help matters.

Thankfully, for Kyle Kuzma and his young teammates, Magic Johnson talked to the team in Philly to try and hash things out and get on the same page. Sure, it may just be a band-aid for the rest of the season since the trade deadline just passed — and some of the same young Lakers’ players are going to be involved in rumors this summer — but they’re fighting for a playoff berth and need to stay focused the rest of the season.

As for the Pelicans — who Johnson said didn’t act “in good faith” during the Anthony Davis trade talks — well, they got what the wanted by screwing with the Lakers. Reportedly, that was their plan all along, and, seeing as how the Lakers have looked beat down in recent weeks, it was mission accomplished.

If you’re a Lakers fan, it’s great to see Kyle Kuzma learn from these experiences, but, damn, it has to suck seeing it happen given how crappy the team’s looked since the rumors started. The young players can put the whole thing in the rearview mirror for now and try to end the year strong.