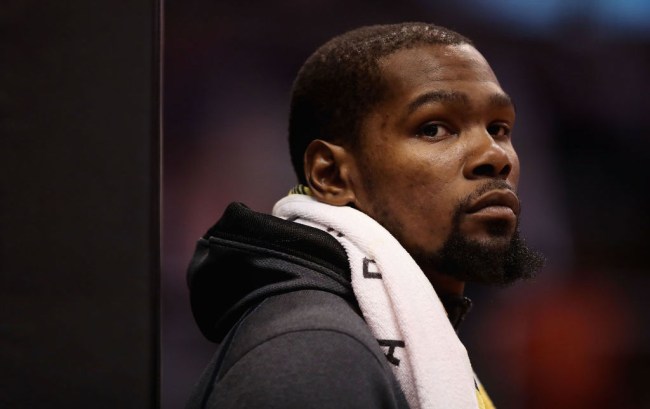 This year’s NBA season has been filled with all of the drama we’ve come to expect from the league but one of the more notable storylines is the current status of Kevin Durant, who will become a free agent at the end of the season.

Durant did the Warriors a favor by taking a discount on a two-year contract he signed during the offseason, which came with a clause that would allow him to opt out and explore his options this summer.

Some major drama kicked off a few months ago after Durant’s brother posted an Instagram comment that seemed to suggest the superstar wouldn’t be playing in the Bay Area next year.

In the weeks that followed, the Warriors had to deal with a number of internal issues thanks in no small part to Draymond Green, who called Durant a “bitch” during a confrontation and led to speculation there was no way he would exercise his option.

Interesting sequence here after Draymond’s play at the end of regulation:

-Durant is pissed saying, “come on man… I’m trying to win a basketball game” with Iguodala talking him down. pic.twitter.com/iqLuxI6SdJ

The Lakers suddenly became the favorites to become the next team to sign Durant as LeBron James does everything in his power to assemble a superteam in Los Angeles. However, based on recent comments from Durant, he might have a hard time making his dreams become a reality.

Over the past month or so, Durant has spent his time cussing out fans but he recently took a break from his verbal spats to discuss his future and explain the most important factor when it comes to free agency: lots and lots of money.

🚨: The debut of “Posted Up with Chris Haynes” podcast is LIVE NOW. Our first episode features @KDTrey5.

Video Snippet: “I just want to make sure I get as much money as I can on my next deal.” pic.twitter.com/Auib8ad0Rs

The interview is over a week old but just popped onto my radar and I couldn’t help but share the best quote to come out of it:

“I just want to make sure I get as much money as I can on my next deal. So I can stack up my money and figure it out. That’s just the plan. Play basketball and stack money.”

I’m no Tony Robbins but that sounds like a pretty good plan to me.