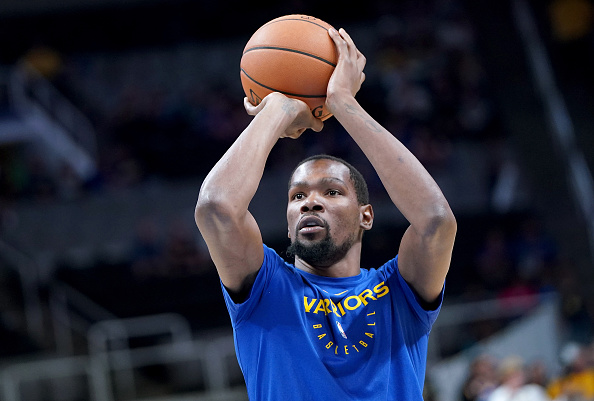 Over the summer they were plenty of reports indicating that some of the top stars in the NBA weren’t interested in playing with LeBron James for one reason or the other.

Worth noting here: Kyrie Irving, Paul George, reportedly Kawhi, and now Jimmy Butler – all not interested in playing with LeBron.

Bleacher Report’s Ric Bucher spoke with several players around the league to see why players seemed to be avoiding teaming up with this generation’s best player.

Kevin Durant was one of the players interviewed by Bucher for the piece and it really sounds like KD has no interest in playing alongside LeBron despite all the rumors saying that he might join the Lakers this off season.

Durant points out that role players not stars benefit from playing with LeBron because they don’t need the ball in their hands as often.

It depends on what kind of player you are,” Durant said. “If you’re Kyle Korver, then it makes sense. Because Kyle Korver in Atlanta was the bulk of the offense, and he’s not a No. 1 option at all, not even close. So his talents benefit more from a guy who can pass and penetrate and get him open.

“If you’re a younger player like a Kawhi, trying to pair him with LeBron James doesn’t really make sense. Kawhi enjoys having the ball in his hands, controlling the offense, dictating the tempo with his post-ups; it’s how he plays the game. A lot of young players are developing that skill. They don’t need another guy.”

Which, I think, he [Love] deserves way more credit for switching his game. Bosh, same way. LeBron is a player that needs to play with guys that already know how they play the game—and shooters. Like, young players that are still developing, it’s always going to be hard because he demands the ball so much, he demands control of the offense and he creates for everybody.”

Durant also went on to say that he understands why people wouldn’t want to play with LeBron because of the “toxic” environment generated by fans and the media.

So much hype comes from being around LeBron from other people,” Durant said. “He has so many fanboys in the media. Even the beat writers just fawn over him. I’m like, we’re playing basketball here, and it’s not even about basketball at certain points. So I get why anyone wouldn’t want to be in that environment because it’s toxic. Especially when the attention is bulls–t attention, fluff. It’s not LeBron’s fault at all; it’s just the fact you have so many groupies in the media that love to hang on every word. Just get out of the way and let us play basketball.”

These quotes by KD are all really good for the Knicks and the Warriors who seem to be the two teams at play to sign him in the offseason.