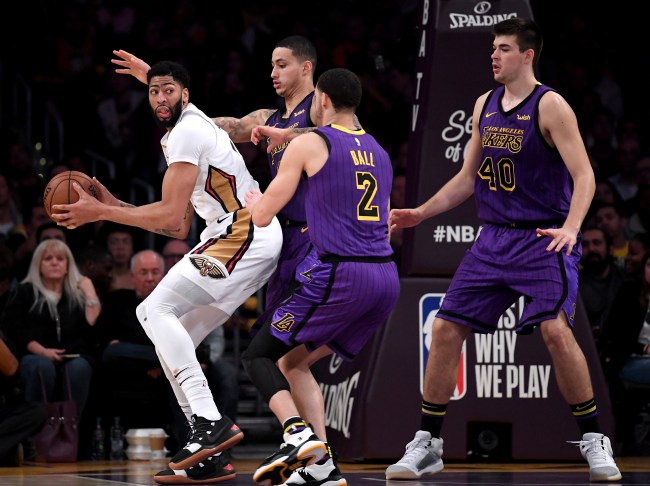 Early this morning ESPN’s Adrian Wojnarowski dropped a bomb when he revealed that Anthony Davis had officially requested a trade from the New Orleans Pelicans a week before the NBA trade deadline.

Los Angeles is the most likely trade destination Davis considering that he shares an agent with Lakers star LeBron James and the fact that the Celtics can’t trade for him until the offseason.

Anthony Davis requesting a trade, as @wojespn has reported, gives teams other than Boston a chance to get involved before the trade deadline while Boston can’t because it already traded for Kyrie Irving while on a Rose rule deal. Celtics arguably can offer the best deal for him.

Here’s a quick explanation of the “Rose Rule” that is preventing the Celtics from trading for Davis today.

So, why isn’t Davis playing in Boston yet? Well, there are a few reasons. The primary thing keeping Davis from being a Celtic is that NBA rules prohibit Ainge from swinging a trade for Davis at the moment.

Why is this? Because the Celtics previously traded for Kyrie Irving. Both Davis and Irving signed contract extensions under the “5th Year 30% Max Criteria”, which is informally known as the Rose Rule (as Derrick Rose was the first player to sign such an extension), and currently known as the Designated Player Rookie Extension. This rule allows a player coming off their rookie scale contract to sign an extension that allows them to skip the 1-6 years of service 25% max salary tier and go immediately to the 7-9 years of service 30% max salary tier. To get there, players have to meet certain criteria. When Davis and Irving signed their extensions, it was based on MVP awards, All-NBA selections and being voted in as All-Star starters. The Designated Player criteria now is based on winning MVP, Defensive Player of the Year, or All-NBA selections.

Celtics have been salivating over Anthony Davis for years but the timing of this trade demand makes it clear that AD ain't trippin' on them. BOS can assemble the best package of any team – but only after July 1. Doesn't matter if AD's fawning over/angling for the Lakers right now

According to LA Times sports writer Brad Turner, the New Orleans Pelicans are starting negotiations by demanding Lonzo Ball, Kyle Kuzma, Ivica Zubac and a first round pick for Davis.

Hearing from sources if Lakers want Anthony Davis, who has requested a trade, LA has to start the deal with Lonzo Ball, Kyle Kuzma, Ivica Zubac, No. 1 pick.

If these are the actual demands from the Pelicans then the Lakers would be foolish to not instantly accept them.