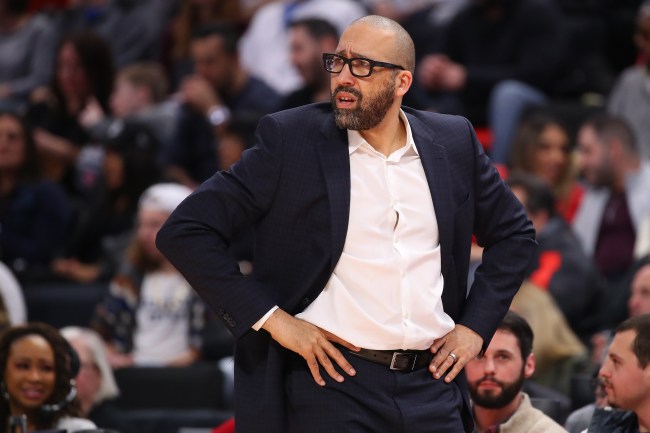 New York Knicks head coach David Fizdale probably didn’t know what the hell he was getting himself into when he took the role back in May of 2018. Whether it was dealing with one of the worst owners in sports, James Dolan, a city with great expectations that hasn’t won a damn thing in decades, or a roster full of crappy players, Fizdale might be regretting that four-year deal he signed less than a year ago.

Fresh off a phenomenally bad 17-game losing streak — the longest in franchise history — the New York Knicks have one thing to look forward to at this point, Zion Williamson, assuming they get lucky and snag the No. 1 overall pick in the NBA Draft Lottery in a few months. But, come on, this is the Knicks, so we should all just predict they end up with the No. 4 pick and draft some foreign player who nobody has ever even heard of.

With Fizdale’s squad easily one of the worst teams in the NBA, the first-year head coach is looking for reasons his young players like Kevin Knox and Frank Ntilikina might not be playing as well as they should be. After all, those are the cornerstones the New York Knicks are building around for the future. Fizdale has some theories; and he’s blaming video games.

Speaking to Mike Vorkunov of The Athletic recently, the New York Knicks head coach actually admitted that he thinks his players are too obsessed with the popular video game Fortnite, which has led to them missing sleep and not concentrating on their mental health. Take a look at what Fizdale was quoted as saying.

“Some guys, I do,” he said. “You don’t know who it is at home doing it, but I think this generation, they are an online generation. Whether it’s communicating late in the night with people. Whether it’s reading stuff, watching stuff, playing video games at the end of the night. It’s still a bunch of blue light in their eyes keeping them up all night. I do get concerned with how much rest they get. How it affects reaction time and irritability, things like that. So, yeah. Guys are different. Some guys aren’t really into it like that. Then there’s other guys.”

The New York Knicks are a complete dumpster fire, so having David Fizdale blame Fortnite as a reason why his team sucks is laughable. Could it be a problem? Maybe. But athletes have been playing video games for years, so to point the finger at the hobby is just another example of the franchise looking, well, Knick-ish.

But, let’s face it, with a paltry 11-47 record, David Fizdale’s looking for any reason to put the blame on anything but the franchise itself. Video games just happens to be the latest, but don’t be surprised if he starts calling out New York City traffic for being too cramped next, which is frustrating his players and putting them in a poor mental state on their way to the arena. That’s a joke, but it’s not too far out of the realm of possibility when it comes to the New York Knicks.