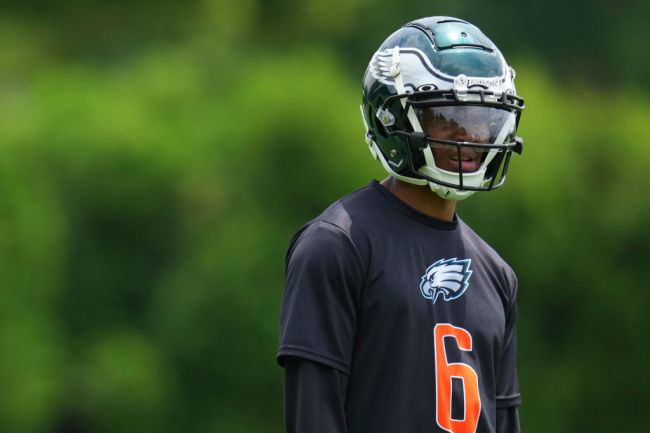 Destroying cornerbacks is nothing new for DeVonta Smith. It’s just something he usually does by torching them on a route. Today was a bit of a different day for Smith.

Today, the Philadelphia Eagles had a joint practice with the Cleveland Browns, which led to a reunion of Smith and Browns cornerback Richard LeCounte. The two attended rival SEC schools and it seems there may still be some animosity between them from those college days.

During today’s practice, LeCounte was talking trash to Smith and Smith absolutely destroyed him in response, reminding LeCounte of the last time they played against each other.

Joint practices getting spicy! Browns Richard LeCounte extended his trashtalking toward #Eagles DeVonta Smith. Smith says last time he saw LeCounte he put him on the bench in reference to Alabama-Georgia days.

The last time Smith an LeCounte met on the field it was in October of 2020 while Smith was playing for Alabama and LeCounte was a Georgia Bulldog. Smith racked up 167 yards and 2 touchdowns on 11 catches that day and Alabama won 41-24.

After this moment, Smith was an absolute nightmare for the Browns defense, making a big play on a slant route where he racked up a ton of yards after the catch and drawing a long pass interference.

#Eagles DeVonta Smith responds during the next 11v11 rep by burning the Browns defense on a slant route. He picks up a ton of YAC too. Play called dead when he reaches the safety. Could’ve been 6 in a real game.

Now Smith draws a DPI against Greedy Williams 40 yards from the LOS. Smith nearly hauled in the one-handed grab, but lots of contact involved, and nearest official flags the Browns.

After a solid rookie season with the Philadelphia Eagles, it looks like DeVonta Smith’s route running and his trash talking could both be problems for opposing defense in year 2.