Fans React To Dez Bryant Calling Out Colin Kaepernick For Not Doing Enough: ‘Where You At?’ 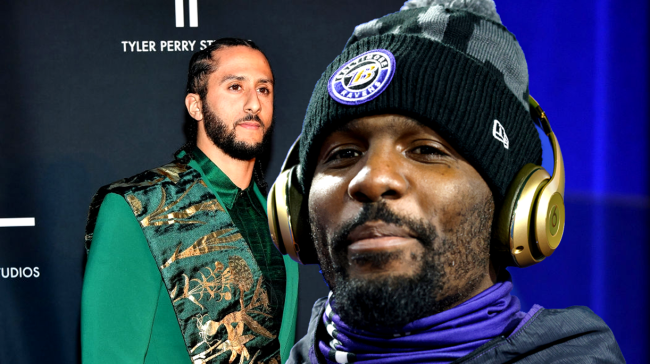 On Monday, during his appearance on the I AM ATHLETE podcast, former NFL wide receiver Dez Bryant called out Colin Kaepernick, who he says he loves, for not using his huge platform to create jobs and help those who supported him when he was facing intense scrutiny and hate.

“I respect Colin Kaepernick, but there’s one thing I don’t respect and I said it, when I get the opportunity and to get on the stage and say it I would say it, and I love them to death so it ain’t no hate or nothing like that, but brother, you had the biggest opportunity in the world to create jobs, build jobs, give jobs to people, the people you was talking about, the people that you so-called standing up for, the people who stood beside you, the people who lost their jobs because of you, where you at? I ain’t heard from you.

“I reached out to you. Where you at?” Bryant continued. “Real, always, and going to stay that way.

“He brought the awareness and that’s why I respect him…”

“But what’s the call to action?” asked Brandon Marshall.

“It wasn’t one. There wasn’t no call to action,” replied Bryant. It’s just like I see all these athletes, I hear them on twitter, they be writing and writing these cool ass captions. I’d be like, hey, the NFL told you to put out a Black Lives Matter tweet and you did it, but I ain’t see you do it.

“That’s a difference. You get what I’m saying?

“So when I communicate with, you know, whenever it’s not the trending thing because I’m for real about it, you don’t say nothing to me, it’s a problem.”

While Bryant’s heart is perhaps in the right place with what he had to say about Colin Kaepernick, it didn’t stop him from getting a lot of very negative criticism on social media.

Like bruh Google exist. Hell not only that he kinda of sort of came up with the know your right camp on the fly because he really didn't have an actual plan. Then donated his own money for the camp and only at the end had other athletes match it. He's a whole legend.

I can’t stand uninformed people that has had plenty of times to educate themselves on certain situations before speaking about it but no not this guy, he’d rather speak on feelings instead of facts…

If this ain't the dumbest " ima try and drag someone" moment ever .. 🤦🏾‍♂️ pic.twitter.com/wNBunBXYgn

You are right. Before criticizing the efforts of others, please have an answer on your sacrifices and initiatives to affect positive change as Colin has painfully demonstrated. Dez is way off and out of his league on social impacts.

What did he accomplish?

Just here for the comments/replies…