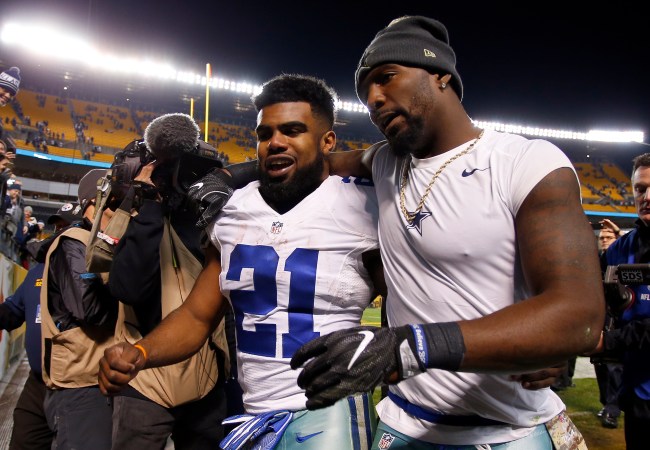 Ezekiel Elliott and the Dallas Cowboys had a rough night on Monday Night Football against the Arizona Cardinals and Dez Bryant appeared to have some thoughts about it.

During the Cardinals-Cowboys ‘MNF’ game, Elliott fumbled the ball twice in the first half and increased his total to his five fumbles this season.

Bryant then took to Twitter and appeared to take a shot at Elliott when he tweeted that he had once advocated for the team to draft running back Derrick Henry because Henry had “desire and passion” and not just physical ability.

I had to delete my tweet a lot y’all childish… you can’t ever have a raw ass convo without somebody creating chaos…. I’m going to keep it basic

I also vouched for the honey badger so who else I’m taking shots at?… wow

Nah brudda you threw a former teammate under the bus and basically insinuated he had no heart or passion. This is a typical take from an analyst but you a former player in that locker room. You know you wrong for that

That somebody is you.

Well you basically said they should have drafted Jalen over Zeke. Own it, Dez.

He shouldn't have deleted it. Call them out and stand by it. Social media ain't real life.