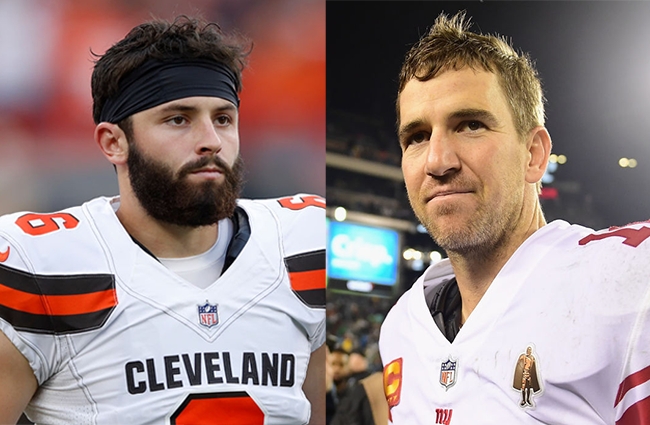 The New York Giants kicked off the most recent NFL season by dropping their first two games and it appeared the Eli Manning Era had come to an end after Pat Shurmur announced Daniel Jones would be stepping into the starting role.

Jones won his first two games and managed to hold his own on his way to setting a number of rookie franchise records in the ensuing weeks, which sounds pretty impressive until you consider one of those records was related to the nine losses he racked up in his first year thanks largely to an eight-game losing streak that culminated with him being sidelined with an ankle sprain.

Manning took the reins for the next two games and managed to stop the Giants’ skid at nine after leading the team to a win over the Dolphins in what would be his final game of the season and what appeared to be the final game of his career.

If he does indeed hang up the cleats—which he has hinted at—Manning will leave behind an interesting legacy, as he managed to win two Super Bowls while also having what may be the most decidedly average career of any NFL quarterback thanks to the 117-117 record he finished with.

There’s a chance he could return next year but it’s doubtful he’ll be rocking a Giants uniform, as he said he has no interest in being a backup. As a result, it’s unclear what other options he has, but if Dez Bryant had it his way, Manning would be taking his talents to Cleveland.

Earlier this week, Bryant fired a shot at Baker Mayfield when he suggested his lack of effort led to the firing of Freddie Kitchens, and now, he’s taken aim at him yet again by suggesting the Browns would be better off with Manning in the starting role.

This what Cleveland Brown fans should be dreaming row right now.. get Eli Manning ..some how some way get 49ers D coordinator..run similar style offense like the 49ers… Cleveland have crazy talent everywhere offense and defense…maximize it while you can I’m taking all bets

Bryant did acknowledge Mayfield has plenty of potential but stressed that he feels Manning could be a better option for Cleveland in the immediate future while helping set Mayfield up for longterm success.

Baker is a good football player but he still need some good experience QB guidance… Baker have more tools than anybody in the league… RPO would have been their answer ..I would have love to see them use a lot of RPO in their offense… https://t.co/rXl0n8l8fy

Sure, the Browns don’t exactly have a stellar track record when it comes to making changes at quarterback, but when you consider how many guys have walked through that revolving door over the past couple of decades, I wouldn’t be shocked if they gave someone else a shot.