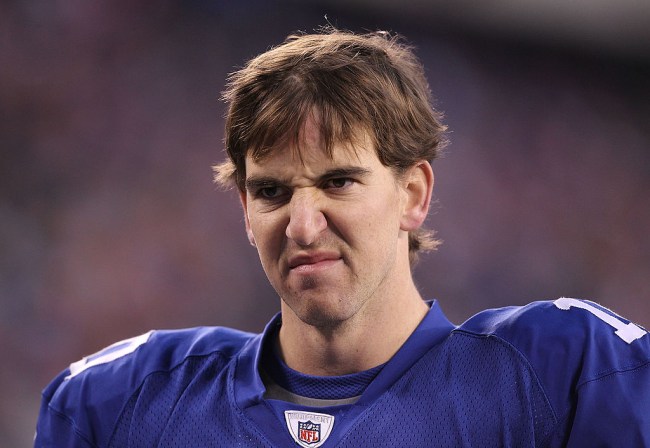 The New York Giants’ season didn’t exactly get off to the start the team envisioned, and after dropping their first two games, the franchise made the executive decision to sideline Eli Manning in favor of Daniel Jones, the rookie they selected in the first round of this year’s draft.

Unfortunately, Jones wasn’t really able to help the Giants turn things around that much and the team saw itself sitting at 2-10 after dropping their game against the Jets in Week 10.

However, that wasn’t the only loss New York suffered last Sunday, as we soon learned Jones had suffered a high ankle sprain that resulted in Manning being named the starter ahead of this week’s Monday Night Football matchup against the Eagles in Philadelphia.

While Manning was playing in enemy territory, he did have at least one person in his corner sitting in the stands: his wife Abby, who had avoided Lincoln Financial Field like the plague since having a fairly unpleasant experience with fans there a few years ago.

Following the contest—which the Giants lost by a score of 23-17—Manning was asked why his wife had decided to make her grand return to Philly and gave an incredibly candid answer in response by acknowledging it’s only a matter of time before he hangs up his cleats.

Eli Manning’s wife Abby was at game even tho she hadn’t come to Philly in years b/c of rough crowd. Why was it important she was there? “Hadn’t played in a few months,” Eli said. “I don’t know if I’m gonna play again. So it was pretty obvious why it was important.”

Based on the quote, it’s unclear if Manning had any knowledge of Jones’ current injury report, as the most recent news seems to indicate that he’ll be sidelined for at least one more week (if not for the rest of the season) so it’s doubtful Monday night’s game is the last time we’ll see him on an NFL field.

According to The Washington Post, Manning was also asked about how much consideration he’s given to his retirement but said he wouldn’t make a decision until next season, although it’s worth noting ESPN reports he’s holding out hope he’ll be a starter somewhere.

Good luck with that, Eli. You’re certainly going to need it.