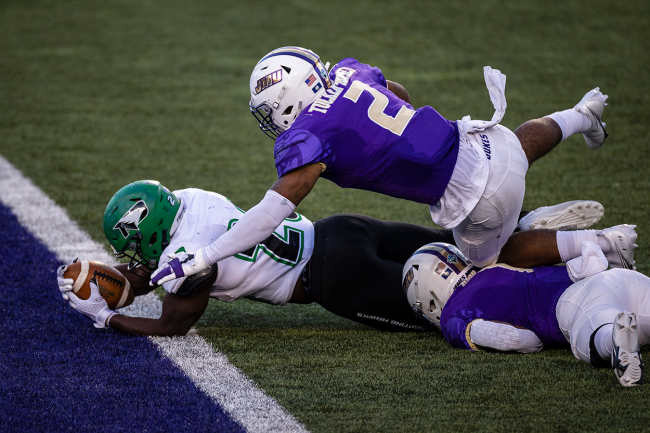 Texas football has a big need at linebacker and has one particular target in mind. The Longhorns recently offered JMU grad transfer Diamonté Tucker-Dorsey out of James Madison University less than 24 hours after he entered the portal.

Hello Texas 😮‍💨🤘🏾, Thank you for the opportunity! 🙏🏾🙏🏾 @TexasFootball pic.twitter.com/plPj88OoGy

Tucker-Dorsey is listed at 5-foot-10, 214 pounds, which is a little bit undersized at the linebacker position. However, in today’s game, size is less important than talent and the Norfolk, Virginia-native is a thumper.

During the 2021 spring season, which was pushed back from the fall of 2020 due to COVID-19, Tucker-Dorsey recorded 52 tackles. He was a crucial part of the defense.

This How It Look When You Come From A Trench… Year 5 Loading 🤫🦍 pic.twitter.com/BDkwwc1Au4

After a strong showing in the spring, he turned around and added to it in the fall. Over the course of last season, Tucker-Dorsey recorded a team-high 116 tackles, nine tackles for loss, 2.5 sacks, two forced fumbles, a fumble recovery and four interceptions en route First-Team All-Conference and Second-Team All-American honors.

Diamonté Tucker-Dorsey will be an immediate impact player at whichever school he chooses to transfer.

Over the course of the last few days, the sixth-year senior has received quite a few offers from all across the country. But he appears to have narrowed it down to two, maybe three.

James Madison transfer LB Diamonte Tucker-Dorsey is setting up visits to UCF, Texas and possibly Texas A&M and hopes to make a decision next week, he told @TheAthletic.

In today’s era of college football, NIL often plays a large role in recruiting and the transfer portal. That may or may not be the case with Tucker-Dorsey.

He recently tweeted out for agents to message him, right in the middle of his recruitment.

In addition, Tucker-Dorsey implied significant NIL potential at Texas by sharing a tweet about a ‘mega’ deal.

Now, he was very active on Twitter and retweeted a lot of posts by a lot of different people that mentioned his name. There may not be a correlation.

But the timing of his retweet and the message for which it conveys is certainly intriguing. Texas’ entire offensive line is receiving a yearly payment and running back Bijan Robinson just signed a deal with the local Lamborghini dealership.

Maybe Tucker-Dorsey is trying to get his? Perhaps Texas is offering him that opportunity?