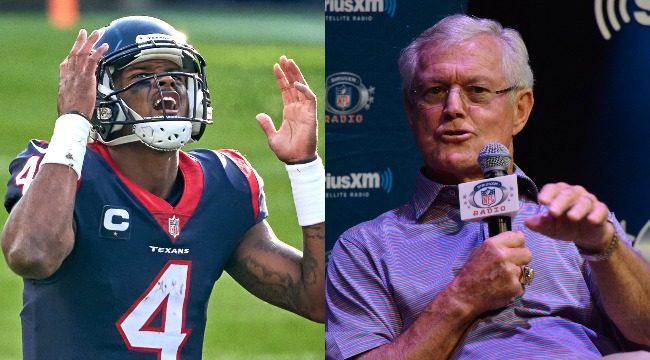 Well-Intentioned Fan 1: Like, yesterday, Deshaun Watson signed and agreed to a four-year $156 million contract, effectively lodging silver spoons up the rectums of each generation of Watsons until the aliens exterminate us. What is a man, if not his word and a very lucrative bond?

Well-Intentioned Fan 2: The Texans franchise was and always will be re-heated pigeon shit and Deshaun Watson’s talent is wasted by a collection of mouth-breathers in suits who don’t deserve him. Send him somewhere better. Like Miami. Or Syria.

Both of these things are true, but Fan 2 has been loudest on Twitter and re-inforced by big names like Andre Johnson and Arian Foster.

Former three-team NFL head coach Dick Vermeil is of the ideology that $156 million is a contract mechanism intended to prevent players from James Hardening out of their commitment because their squad belongs in the Sun Belt Conference.

What does Houston do with Deshaun?

“Well I think they change his diapers. Nowhere in his contract does it say that he’s involved in making the decisions who coaches and who leads the organization. And I think that when players get outside their role of what they really are, he’s a great NFL football player and has always been a great kid, but I think he shuts his mouth and becomes a better football player and leads the football team and let the leaders of the organization lead him.

…I just don’t see him playing anywhere else and I see him calming down and maturing a little bit and go be a good football player and earn the money they’re paying him.”

The Texans were bad this season. How bad? Your-Once-In-A-Generation-Defensive-Player-Apologizing-To-You-For-Wasting-Your-Life bad.

Deciding whether or not to honor a nine-figure contract for greener pastures are the problems us virgins wish we had, amirite?