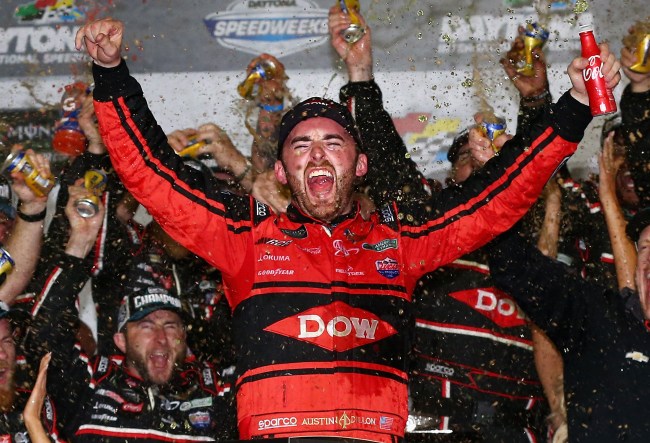 Austin Dillon, the grandson of Richard Childress (he races for Richard Childress Racing), won the 2018 Daytona 500; winning The Great American Race in the #3 Chevrolet (GM) car, 20 years after Dale Earnhardt Jr. broke his career-long draught at the 2.5-mile track. Run in front of a sold-out crowd (101,500 reserved stadium seats), Dillon used a “last-lap, bump and run move that was absolutely Earnhardt-like” to win the 60th edition of the Monster Energy NASCAR Cup Series season. Austin follows the market closely and shared some insight on his personal portfolio with JohnWallStreet.

JWS: Do you personally invest in your corporate sponsors?

Dillon: Every sponsor that I have, that is traded (DWDP, GIS), I have stock in. It works well. You can build together. When you are running well, they are doing well. It’s cool how that works.

JWS: You mentioned that you do a little bit of trading for fun. Can you share a few of your holdings?

Dillon: Caterpillar (CAT), I had them as one of our partners for a while; my Grandpa did well on Caterpillar. Builders First Source (BLDR) has been doing well. Nintendo (NTDOY). I was playing Pokeman like crazy when it came out and was like I should get some stock, they’ve been doing well.

Can you give us one trade you’d like to have back?

Howie Long-Short: While Dillon only references DWDP and GIS (as corporate sponsors he invests in), he owned shares of Cabela’s prior to the its $4 billion acquisition by Bass Pro Shops. Bass Pro Shops remains one of Dillon’s sponsors, but is not publicly traded.

Fan Marino: Dillon returning the famed #3 Chevrolet to Victory Lane was the biggest story line from Sunday’s race, but there were several other noteworthy headlines. Darrell “Bubba” Wallace Jr. returned a Richard Petty Motorsports car to the Daytona 500; the rookie finished 2nd, the highest ever finish for an African-American driver (and first time an African American has participated in the race since Wendell Scott in 1969). Danica Patrick was also competing in her last NASCAR race. She finished 35th after being involved in a Turn 3 crash on Lap 102. The wreck also ended the day for Chase Elliott, Brad Keselowski and Kevin Harvick.

Bulls Rookie Lauri Markkanen participated in both the NBA Rising Star’s Challenge (scored 15 on 7/11 shooting) on Friday night and the Skills Competition (finishing 2nd to Spencer Dinwiddie) on All-Star Saturday night. Panini America, which has been featuring Markkanen on cards all season as one of the league’s more prominent rookies, is selling special edition cards from All-Star weekend and will have one for Lauri. JohnWallStreet had the chance to speak to Lauri on Saturday afternoon and hit several topics including the All-Star he was most excited to meet in Los Angeles.

JWS: You’re from Finland. It would have been an easy decision to play professionally in Europe last year, make a bunch of money and then declare yourself eligible for the NBA draft; but, you chose to play at Arizona for free. Why?

Lauri: I played my whole life in Europe. I had a lot to learn. The game is a little bit different here. At the same time, I was looking at my long-term goal; I wanted to be in the NBA, so I thought college basketball was the right direction to do.

JWS: Arizona was implicated in the FBI recruiting scandal. North Carolina and Utah also heavily recruited you. Did anyone offer you money?

Lauri: I don’t know what schools are involved, but I was fortunate enough to have coaches (see: Sean Miller) that didn’t do it (pay players).

Howie Long-Short: Recent reports indicate that as many as 50 schools could be wrapped in the FBI investigation, including half of the Top 16 teams in the country. I tend to believe Lauri when he says no NCAA program offered him money. He passed up a European pro contract to play college ball and his father was a professional basketball player; he wouldn’t seem like the type of prospect that could be “bought”.

Fan Marino: As a rookie, this weekend may have been your first opportunity to spend time with some of the league’s biggest stars. Which All-Star were you most excited to meet?

Lauri: Growing up, LeBron was my favorite player; so, I was excited to meet him.

500 to the 500, Kevin Harvick and Daniel Blake (Busch Beer) on the Unique Promotion

Busch Beer ran an impactful 500 to the 500 promotion, bringing 500 fans to Sunday’s running of The Great American Race; the 2018 Daytona 500. The lucky winners received flights, hotel and airfare, as well as a chance to meet and take a photo with Kevin Harvick. JohnWallStreet was in Daytona Beach and got a chance to speak with both Kevin Harvick and Daniel Blake (Busch Beer’s Brand Manager) about the promotion just hours before the race.

JWS: You agreed to travel from Daytona Beach to Orlando (50+ miles, then back), the night before the biggest race of the season to meet your fans. Why did you agree to do that?

Kevin: I would say this unique because it is such a big promotion and Busch put so much into it; it was also planned way in advance. It’s an opportunity to have more interaction with the fans than you would walking through the garage or at the racetrack, because you are in competition mode. As long as I can manage my time and know what I’m getting into, I’m good with it. I’m also in Daytona Beach by myself, my family doesn’t come in until tomorrow; and I like to do stuff to take my mind off things, anyways.

JWS: You mentioned that if a sponsor is willing to put the time and effort into a promotion of this size, it’s certainly worth your while to participate; regardless of how close it is to the race. How does it benefit you?

Kevin: The biggest pop of the season, from a marketing and exposure standpoint, is going to come in the first 6 weeks. The majority of your souvenir sales, unless you win the championship, happen in the first 2 weeks. You can follow the TV ratings and everything that happens within the sport. The bigger you make this week, the bigger the next 5 weeks are.

Blake: The timing. NASCAR’s biggest event of the year is at the start of the season and we wanted our biggest promotion to be at the start of the season as well. There’s no better way to do that than sending 500 fans to the Daytona 500, for one of the most memorable experiences of their life. It’s not just a once in a lifetime racing experience, it’s a once-in-a-lifetime experience for some of these fans to get out of their hometowns, to see Florida, to get on a plane and to meet new people with a common interest.

JWS: How do you gauge the success (or lack thereof) of a campaign like this?

Blake: Social buzz and impressions, volume sales and shares are another; but, for something like this it’s more intangible. It’s difficult to measure sending 500 fans on a once-in-a-lifetime experience, but those are the type of things that resonate and hopefully compound. They (the winners) tell their friends and family about the brand and the great experience they had here.

Howie Long-Short: Anheuser-Busch InBev (BUD) reported its value brand portfolio, led by the Busch brand family, performed well in both Q2 and Q3 ’17. Busch has a loyal consumer base and its brands require minimal investment; positive news for a company that has watched Budweiser fall out of the Top 3 in U.S. sales (Bud Light, Coors Light and Miller Lite are the Top 3, Budweiser is 4th).

Fan Marino: Fans that pulled checkered cans from packages of Busch and Busch Light, were then asked to submit videos expressing their enthusiasm for both the brand and their interest in attending the Daytona 500. Christina Pin was among the 250 winners (each got to bring a guest) and brought her husband to the race. I asked Christina to describe the video that got her selected and her reaction when she found out she had won.

Christina: It had just snowed. I decided to put on my snow pants and slide down the hill in my backyard holding my Busch can…and screamed Buschhhhhhhh beer! When I found out my submission had been selected, I was ecstatic. We live in Minnesota, it’s freezing there and we’ve never been to a race, ever.