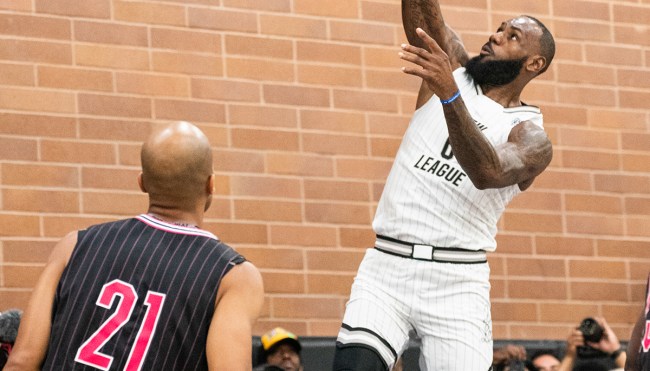 If you’ve played competitive basketball at basically any level, there’s a pretty good chance you’ve found yourself facing off against an opponent who simply exists on another tier of talent; the kind of person who’s capable of effortlessly putting on the kind of show that makes you wonder why you even bothered picking up a ball in the first place.

That happened to me in high school when I was unfortunate enough to face off against Kris Dunn during a showdown that instantly dashed any dreams I had of eventually playing in the NBA. However, you can also take a bit of solace in knowing there’s a very good chance anyone who’s made your life miserable probably found also themselves humbled at some point.

Take, for example, Dion Wright, who posted some pretty respectable numbers over the course of the four seasons he played as a member of St. Bonaventure’s college basketball team. However, he found himself in a fairly unenviable situation last weekend courtesy of LeBron James, who he was tasked with guarding during the Drew League game that will likely define his legacy.

Wright did what he could to defend his honor after James dropped 42 points on his team during the contest, and it’s honestly hard not to respect him for posting 20 of his own despite not being able to do much to stop a man who’s been considered one of the most talented players on the planet for close to two decades.

He dropped 40 I had 20 for every 2 points he had I had 1 . . . That’s really a once in a lifetime player we had no nba guys they had 2 and only loss by 2 points if bron doesn’t show up we win for sure https://t.co/oodAQhiKUU

Now, we’ve gotten some more insight into what went down courtesy of a video Wright posted where he shared some more details concerning his side of the story.

The 6’7″ forward says he was actually in Buffalo preparing for The Basketball Tournament when he heard LeBron would be facing off against his squad in a Drew League game. He shared some screenshots of his buddies in a group chat clowning on him and says he eventually decided to purchase a plane ticket for the 2,500-mile journey back to the West Coast in order to seize what was likely a once-in-a-lifetime opportunity.

The entire story of me playing Lebron James at the drew league still can’t believe all this happened life is really crazy I thank God for this opportunity. . . S/O to @BWright1_ my PR guy! pic.twitter.com/JVrwOLdygr

He did attempt some revisionist history with the slightly egotistical highlight reel he included at the end of the account, but with that said, it’s hard to blame him for doing what he can to change the narrative (with that said, based on the decade of personal experience I have when it comes to dealing with dumb people on the internet, Wright would make his life a whole lot easier by simply choosing to not fight the most futile battle possible).