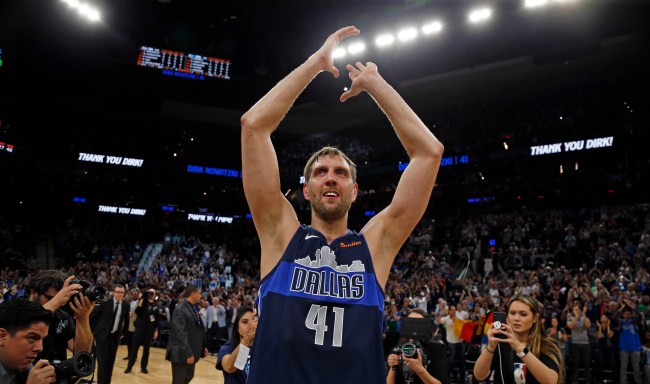 Dirk Nowitzki is one of the all-time greats in the NBA. He’s inarguably the greatest German-born player in NBA history. Dirk Nowitzki made the NBA All-Star Team 14 times, was named 2011 NBA Finals MVP when the Dallas Mavericks won the title, and he was named the NBA MVP back in 2007.

I was fortunate enough to see Dirk play in person more than a handful of times and I’ll always remember him as one of my favorite NBA players, and that’s precisely why I’m so glad that Dirk’s living it up in retirement.

Dirk was listed at 7’0″ and 245-pounds while playing in the NBA which is a pretty slim frame from a guy who’s seven feet tall. Now that Dirk’s slipped into retirement, he’s packing on the pounds.

Appearing as a guest on 105.3 The Fan’s Ben and Skin show, Dirk discussed how he’s been housing ice cream every single day of retirement and how this has already seen a spike in pounds on the scale.

Nowitzki said he has been busy since retiring, and that he is spending more time with his three kids, work with his foundation, and not being in the gym.
“I’ve had ice cream almost every day, I’ve tried some suits on and they don’t fit,” Nowitzki said. “I’m probably about 15 [pounds> plus.”

Nowitzki was honored in the state capital on Tuesday, saying he’s never been to Austin and even drove through Waco for the first time.

When asked if he’ll play a game of pick-up basketball, Nowitzki said his foot and ankle have been bothering him, restricting him from playing tennis. With the addition of Luka Doncic and Kristaps Porzingis, Nowitzki said he wishes he could have played one more year.
“This season was tough on me, I think a lot of people didn’t notice it that much, I was struggling at times, I was in pain a lot during games. It was just not as much fun as it once was.” (via)

If you want to stream that radio interview you can do so here:

Throughout his career, Dirk sacrificed nearly $200 MILLION in contracts so the Dallas Mavericks could sign other players and remain competitive, the Tom Brady approach to winning. With that said, Dirk Nowitzki still earned a total of $251,646,362 on the court in salary (without including endorsements) so now is the time for this gentle giant to enjoy the fruits of his labor.

Based on Dirk’s Instagram activity you can’t really tell that he’s been packing on the pounds lately:

Super happy to be named a @FIBAWC ambassador along with my guy @KobeBryant. See you in China from August 31st! #WorldGotGame #FIBAWC

Who's coming out to support Sunday? Link for tickets is in my bio!

If I was retiring and able to eat any food I wanted every single day without feeling guilty or suffering health complications I’m not sure it’d be ice cream. I’d probably go with various flavors of Haribo Sour Gummies, the European flavors are always better. That, or steak for dinner every night.