D.J. Swearinger Publicizes The Jay Gruden Text Message Exchange That Made Him ‘Lose Respect’ For His Coach 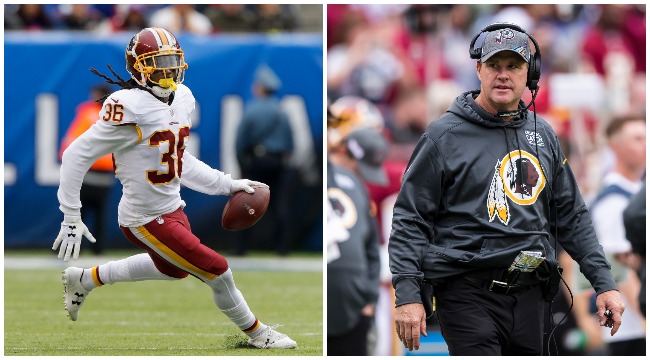 Do you guys remember the Redsk*ns getting Stone Cold stunner’ed by the Giants on their home turf, 40-16, on Sunday December 9, 2018?

Of course you don’t, by then both teams had already nestled into the basement of the NFC East. This game came and went faster than Jason Biggs, taking with it a piece of the soul of anyone at FedExField that day who suffered through their team dropping its fourth straight en route to a limp 7-9 record.

Washington safety D.J. Swearinger, who was cut that season with one game remaining, may be the only one who remembers that game well, as this game birthed the moment the veteran lost all respect for Jay Gruden and the coaching staff.

Motivated by the 15 women alleging sexual harassment and verbal abuse against former club officials, and in turn making coach Jay Gruden looks like a huge dirtbag, Swearinger thought it a fitting time to expose texts messages he allegedly received from his coach in the immediate aftermath of the beating from the Giants.

The 28-year-old, now with the Saints, posted that conversation to Instagram:

#WhatTheyDontSee So Let’s Set The Record Straight on Why & How Things Went South For Me In Washington. To All My Athletes, Imagine Getting A Text Like This From Your Head Coach @ 10 @ night about an interview where you thought you handled It Professionally after getting blew Out 40-16 by Giants. This Is When I Lost Respect For The Washington Staff & Head Coach. He Wanted Me To Act Out But I Handled It Professionally & The Next Day He Told Me That Somebody Told Him That I Said Something About him in the interview but when he watched the interview he realized that person was lying & he actually agreed with everything I said. Soooo as a player how would you look @ your coach for the rest of the season?! How can you motivate yourself to play for a guy who talks to you less than a man?! Being the man I am I couldn’t be myself after this & that is what lead me to my last interview in which I said a few things that were true but not on the right stage or platform. Understand It’s A Cause & Effect To Everything In Life!!! As A Man You Have To Find Your Peace Through All The Negativity & Move Fwd!! I Was Gonna Give The Man A Pass but after what’s going on with that organization with women! They all need to be exposed. I have a daughter to raise!

Uhh did Jay Gruden challenge an NFL defensive back to a fight? Dude was talking real tough for someone who looks like a mall cop with a pension.

Jay, did you not learn anything from Andre Ellington?

Something tells me in just days, worrying about being on D.J. Swearinger’s shit list is going to be the last of Jay Gruden’s worries.