D.K. Metcalf Grabbed The TV Camera After Scoring A Touchdown And Got Himself An Early Birthday Gift From His Teammates 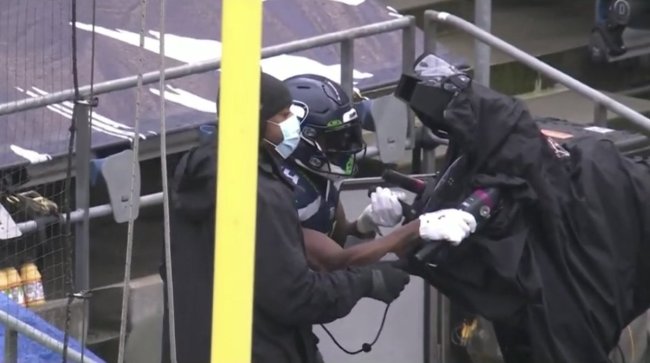 Seattle Seahawks wide receiver D.K. Metcalf has been on a tear. The second-year player out of Ole Miss leads the league in receiving and seems to go viral for something different every week. During Sunday’s game against the Jets, No. 14 hauled in his 10th touchdown catch of the year to take a 14-3 lead over the NFL’s worst team. He hit corner back Bryce Hall with an inside move and broke to the corner, leaving his defender in the dust. Hall never stood a chance.

10th TD catch of the season for @dkm14 #Seahawks

After the reception, Metcalf celebrated by running over to the sideline, jumping into the stands and commandeering the television camera. He was flagged fifteen yards for unsportsmanlike conduct and will likely be fined for his antics, but didn’t seem to care.

Lmao DK Metcalf stealing the media camera and using it for his TD celebration. #Seahawks pic.twitter.com/I9mmXWevBi

The celebration, of course, is not the first time this has been done. Chad Johnson was the original cameraman. Ochocinco took note of the young receiver’s tribute and tweeted about him on Sunday afternoon.

This is so awesome 😎 https://t.co/cxo0yc9iJQ

Most recently, Tyreek Hill did the same in 2018.

CBS was airing the game and released Metcalf’s video footage, and there is a lot of improvement to be had if he is to ever go into the broadcast side of the business.

The 22-year-old continues to take the league by storm and is having a ton of fun while doing it. After he hopped back down on the field, Metcalf grabbed a laminated card of some sort. It wasn’t clear what exactly it was that he grabbed, but one clean angle gave a peak at the written note. Tomorrow, Dec. 14, is his 23rd birthday and the prop was a gift to himself from his fellow wide receivers.

D.K. Metcalf turns 23 years old tomorrow. He got himself a birthday gift from his fellow wide receivers 😂🥳 pic.twitter.com/UZ2NZNIsZD