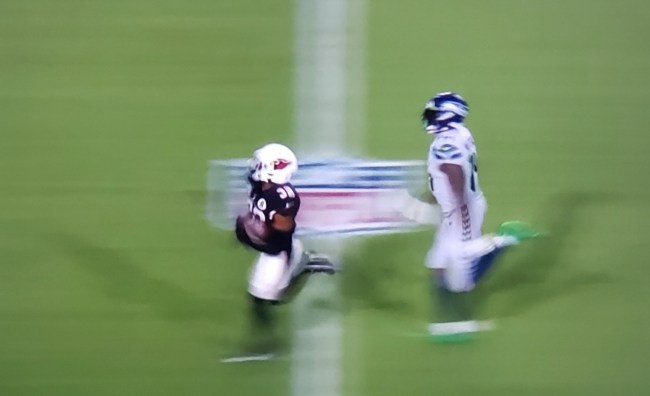 During the Cardinals-Seahawks game on Sunday night, there was an alien sighting in the second quarter. The alien even has a name, too, he goes by DK Metcalf.

After Russell Wilson had a pass picked off by Budda Baker just short of the goal line it looked like a sure thing that he was going to return it for a pick-six, but then Metcalf decided to show the world that he’s different.

Metcalf’s chase from behind kept points off the board for the Cardinals as they turned it over on downs on the ensuing drive.

DK Metcalf is not normal.😦 pic.twitter.com/nGkwHLUGUz

Baker tweeted after the Cardinals’ 37-34 overtime win that Metcalf ‘hawked’ his ass.

While Baker’s reaction on Twitter was strong, Arizona head coach Kliff Kingsbury took things to another level as he referred to Metcalf as a stallion.

Kliff Kingsbury thought Budda Baker had a pick-six "until that huge stallion of a human came galloping out of nowhere. DK Metcalf is an absolute freak."

Metcalf is the definition of a freak athlete, the man is a specimen. Given the fact that he can make plays like what we saw on Sunday night and that he’s emerging as one of the most dominant wideouts in the game, it’s unbelievable he wasn’t drafted until the final pick in the second round back in 2019. He was the ninth wide receiver taken off the boar that year.