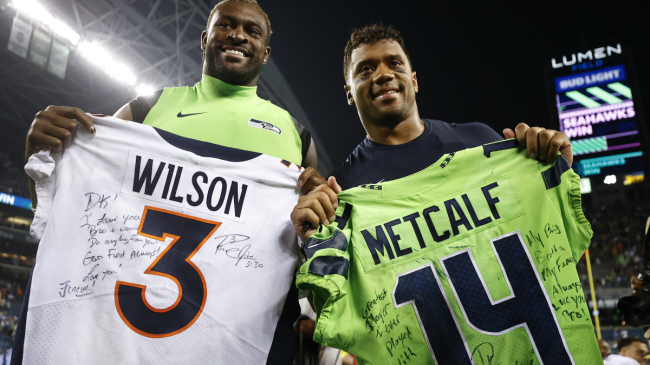 Russell Wilson didn’t receive the warmest of welcomes upon returning to Seattle.

The passer spent the first 10 seasons of his career with the Seahawks, leading the franchise to a Super Bowl title in 2013. Unfortunately, the relationship soured, and Wilson was traded to the Broncos over the offseason. Fittingly, his first game with Denver came against his former team in his former home venue.

But while many believed that he’d be cheered running out of the opposing tunnel on Monday night, he received the opposite ovation. Wilson was booed by the Seahawks faithful, which was just the start of a rough season opener in Lumen Field.

The Broncos couldn’t get out of their own way, fumbling twice on the goal line and missing a game-winning field goal as time expired in a 17-16 defeat. Wilson played well, racking up 340 passing yards, but it wasn’t enough to overcome the blunders.

After the game, a number of notable former teammates threw shade at the quarterback.

He is adjusting to his personnel…. https://t.co/fChqB0VVFE

But there was one player that refused to bash his former quarterback, and he’s now going viral for his act of respect.

Before the game, Metcalf was seen signing autographs for fans, but he refused to give one particular signature.

One Seahawks’ supporter brought a “Let’s Cook Russ” poster, an obvious play on the “Let Russ Cook” mantra that became popular in Seattle but check out DK’s reaction when asked for the autograph.

DK Metcalf is a real one for this 💯 @brgridiron

He obviously has love for his former teammate, with the two exchanging jerseys after the game. Classy moves all around by DK Metcalf.