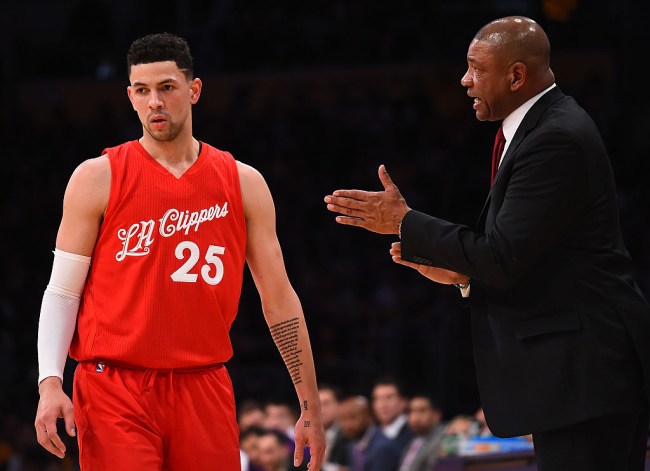 Ever since joining the Clippers and playing for his father, Austin Rivers has been the laughing stock of the NBA. In an interview during the middle of season Rivers lamented how he hated being called “the coach’s son’.

“People can say whatever they want about me and my father [LA Clippers coach Doc Rivers],” the guard told ESPN during a lengthy interview Wednesday night. “I get it. I can even put my ego aside and understand why people don’t like the situation. When I was growing up and I’d see the coach’s son, you’d be like, ‘He sucks. He’s only on the team because of his dad.’ So I 7

I know what the narrative is on me,” Rivers said. “It’s because I come from money and I have a swagger and confidence about me.

“[But] if I didn’t have this confidence or swagger in myself, I wouldn’t be built to handle the negativity that I’ve gotten. I would’ve already broken down years ago because I’ve gotten this since high school. I’ve turned it into a fuel and it’s helped me. I go into each away arena and it’s rough, because the s— I hear. This chip on my shoulder, this swagger and confidence, it helps me. If I didn’t have it, I would not be in the NBA.”

Today, Austin got traded by his father to the Washington Wizards and the Internet had some pretty hilarious reactions.

Doc Rivers trading Austin Rivers is like when your dad promises to not let go of your bike when you’re first learning to ride but then he does. Except this time Doc got in his car and drove off with Austin still riding. pic.twitter.com/EvddJrPvJc

Austin Rivers on the phone with his mom right now pic.twitter.com/nsc2wswuxJ

Austin Rivers: “Dad, I really appreciated the opportunity you gave me last season. But any chance I could get more playing time?”

Austin Rivers: “I can’t wait to spend the 4th of July with you here in LA!”

Austin Rivers: "You wouldn't ever trade me, right dad?"

Austin Rivers when he finds out his dad traded him pic.twitter.com/94xqjcKXXA