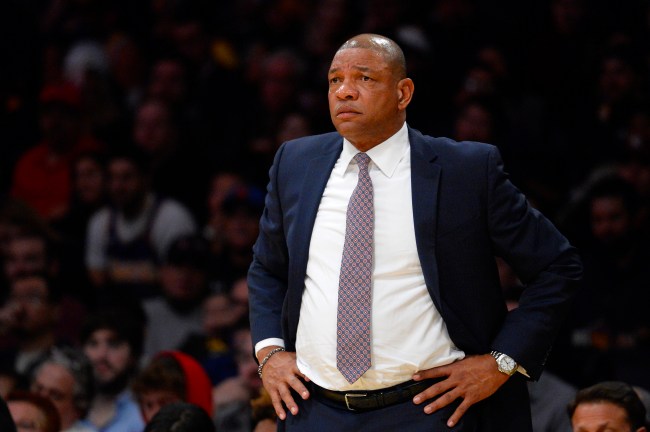 In the past week a wild rumor has emerged about how Doc Rivers is interested in joining the Lakers next season to take over for Luke Walton.

Would Rivers earnestly consider leaving a rebuilt playoff team (three starters are 22, 22 & 20; and then there’s Danilo Gallinari and two nuclear subs) that will enjoy enough cap space July 1 to entice on paper two free agents worthy of maximum investment (Kevin Durant and Kawhi Leonard are my educated guesses), and an owner who won’t faintly flinch to shell it out?

Of course, Rivers would!

According to a confidant, he almost always has wanted to leash the Lakers. In conversations over the years, Doc frequently expressed an ardent ambition to coach either them, or the Knicks before retiring, if for no other motivation than their worldwide brands.

Rivers immediately went out in public to squash the rumpr while speaking to the media.

Steve Ballmer and Doc Rivers did a short extension over the summer that allowed both sides a chance to escape deal in 2019. As Rivers told reporters, that's been replaced with a longer-term deal. For Rivers, Lakers were never a consideration. He wanted to crush that talk today.

Doc Rivers shuts down rumors of him being interested in leaving the Los Angeles Clippers this summer to coach the Lakers 👀 pic.twitter.com/ZU7m9jysyy

I’m going nowhere,” “I can tell you that straight and up front. I’m going to be here until Steve [Ballmer] says ‘Get out.’”

“We just thought we’d put that to bed,” The contract hasn’t been finalized — Ballmer said they’re still in the process of “dotting some I’s and crossing some Ts.”

Yesterday ESPN’s Michael Wilbon went on air and revealed that people close to Rivers are telling him not take the job because LeBron’s attitude towards coaches.

There are people in southern California right in that environment telling Doc, “You don’t want do this.” And one of those reasons is simply LeBron James. He’s been told by people – and I know this – LeBron doesn’t want to be coached.

Considering how well the Clippers look and how toxic the Lakers have been I would be shocked that Rivers would even consider trading jobs right now.