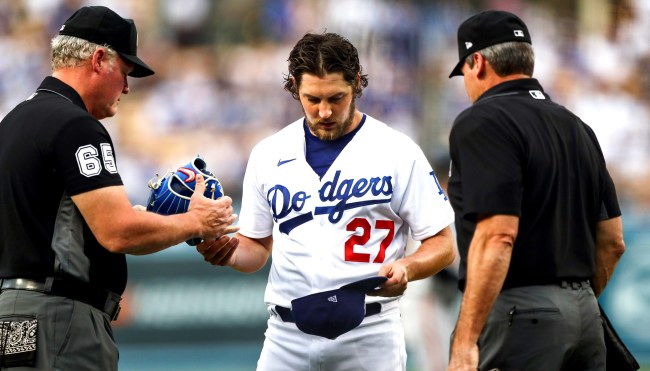 According to a new report by the Los Angeles Times, a majority of Dodgers players do not want Trevor Bauer to return to the team under any circumstances.

The controversial 2020 NL Cy Young Award winner is currently on paid administrative leave as Major League Baseball investigates allegations of a felony sexual assault against him.

The woman who brought the charges against Bauer submitted a 85-page report to Los Angeles County Superior Court detailing the allegations against the pitcher while obtaining a restraining order.

Bauer’s representatives since released what they claim are text messages between Bauer and his accuser that they say reveal the encounters were “wholly consensual.”

On Sunday, the Los Angeles Times reported that, regardless of the outcomes of the investigations being conducted by Major League Baseball and the Pasadena Police Department, there are numerous people within the Dodgers organization, including many of his teammates, who don’t want him back.

Bauer’s career is in jeopardy, and his stay with the Dodgers could be over, the sexual-assault allegations having turned a pitcher in his prime into a pariah in his own clubhouse, where no teammate has spoken publicly about him or come to his defense. Two people with knowledge of Dodgers clubhouse dynamics, who are unauthorized to speak publicly about the situation, said that a majority of players do not want Bauer back under any circumstances.

Even if he is not charged with a crime, Trevor Bauer could be facing a lengthy MLB suspension without pay. Since MLB implemented its domestic violence policy in the summer of 2015, 14 players — five of whom were placed on paid administrative leave — have been suspended for violating it, with suspensions ranging from 15 to 162 games.

The alleged attitude within the Dodgers clubhouse regarding Bauer is an about face from a Feb. 11 press conference when L.A. general manager Andrew Friedman told the media, “The most important thing is every teammate we talked to, all the feedback we got from every organization he was with, was not only incredibly positive in terms of the type of teammate he is but also in terms of the impact that he makes on each organization.”