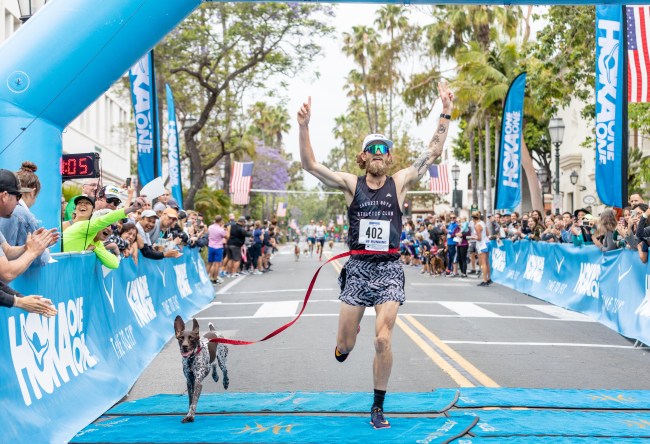 Running with your dog can be a mutually beneficial partnership for Man and his Best Friend. The runner gets exercise and gets to bond with Man’s Best Friend and the dog gets to burn all of that energy that’s stored up from sitting inside all day.

At some point, a group of runners decided to take this shit to the next level and created the Dog Mile World Championship in Santa Barbara, California. This year’s Dog Mile World Championship saw a record-breaking performance from runner Dan Wehunt and his 4-year-old German Shorthaired Pointer named Odess who almost ran a sub-4:00 mile and in doing so they set a new world record for the Fastest Dog Mile.

It’s worth noting that one runner has already clocked a sub-4:00 mile with his dog. Anthony Famiglietti is a two-time Steeplechase Olympian and in February he ran a sub-4:00 mile but it didn’t count because it was a personal time trial and not an official race.

Dan Wehunt smashed the previous Dog Mile record which was a time of 4:13 clocked by runner Brian Duff and his Weimaraner named Kaydom back at the 2016 Dog Mile World Championship. 4-year-old Odessa and Dan Wehunt shaved six seconds off that time and set a new record of 4:07. 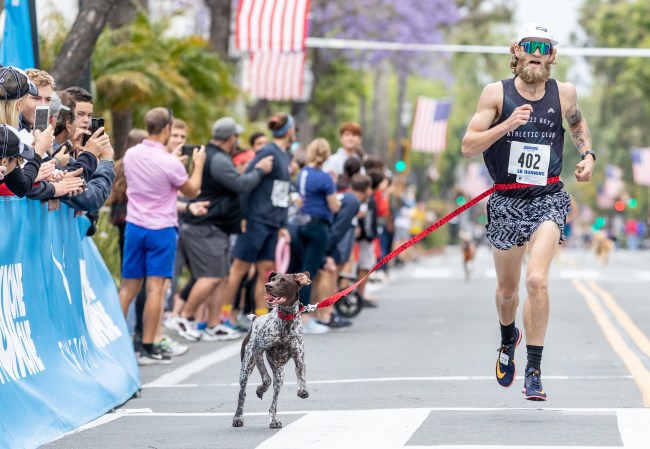 When asked about going sub-4:00 next year, Dan said that was the goal. He went on to say it was him that held Odessa back and definitely not the other way around:

If you’re wondering what the burden of running a 4-minute mile looks like on a dog, Dan Wehunt explained to Runners World what their typical training sessions might look like:

Wehunt, a former DI runner for the University of Florida, logs about 40 miles a week, almost all of which include Odessa right by his side. Running with his pup, he believes, helps him find joy in training, which, at times, could become monotonous.“Odessa has tagged along on a few tempo long runs where we average around 5:30-mile pace for about 90 minutes,” said Wehunt.

With Odessa’s affinity for endurance runs, Wehunt sees some longer races in their future.
“I’d probably limit Odessa’s road racing to nothing more than a 10k, so the asphalt doesn’t hurt her paws,” he said. “But a longer trail race would be a ton of fun.” (via) 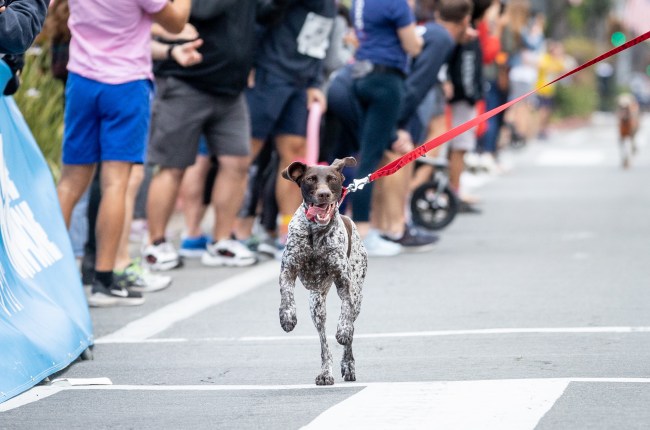 Since tearing my lateral meniscus on my right knee for a second time I cannot even begin to wrap my mind around running a sub-4-minute mile. I also have a Bernese Mountain Dog, a heavy dog that’s considered a ‘large breed’ and is prone to quick bursts of speed but gets completely gassed after two or three good sprints.

There are definitely some dog breeds that are predisposed for this type of running. My parents have two Spinone Italianos and I think they’d be perfect for this. All they want to do is run at top speed in an open field. Odessa’s breed, the German Shorthaired Pointer is perfect, as are others skinny breeds like the Whippet, Vizsla, Saluki, Dalmatian, Borzoi, Border Collie, and a handful of others.

Here’s that 3:59-mile ran by Olympian Anthony Famiglietti a few months ago:

Will we see a sub-4 minute mile ran at next year’s Dog Mile World Championship in Santa Barbara? It seems likely.

For more on this story, you can visit Runners World.