As If Being A Dolphins Fan Didn’t Suck Enough, Now They’ve Got Vendors Charging $724 For Just Two Beers 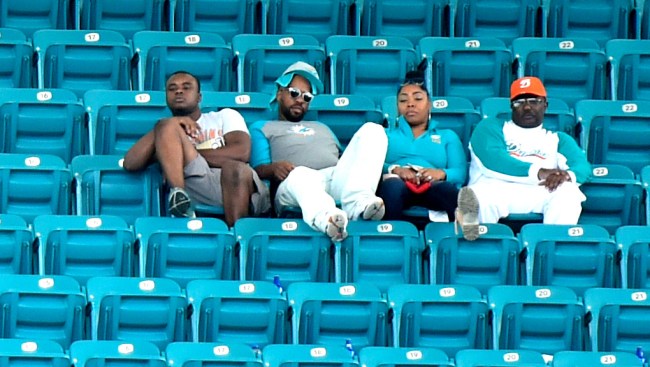 It ain’t easy being a fan of the Miami Dolphins these days. The team, who is totally NOT tanking so they can get the number one overall pick in next year’s NFL draft, is currerntly 0-4 having been outscored 163 to 26 and shows little hope for a victory at any point this season.

That poor showing and lack of hope has certainly contributed to the vast amount of fans using their valuable Dolphins tickets to attend games dressed up as empty seats.

That and the whole #TankForTua thing.

However, the one thing fans who do actually come to Dolphins don’t expect is to have to pay over $700 for a couple of cold ones.

Which is allegedly what happened to one fan during the Dolphins loss to the Chargers on Sunday at Hard Rock Stadium, according to the Miami Herald.

He grabbed the fan’s card and swiped it using a personal card reader, not the device the stadium provides to vendors, according to the police report. Shortly after the transaction was processed, the fan received an alert from his bank notifying him of the steep charge to his card. It also displayed the vendor’s name.

For the record, Collier was not working for Hard Rock Stadium nor the Dolphins. He was an employee of subcontractor Rocket Man. I say was, because the company says he has since been fired.

“As the chosen provider of walking vendors across dozens of stadiums, we take the matter of security extremely seriously, and train and monitor our vendors to safeguard our customers,” the company said. “Our onsite supervisor contacted the authorities immediately upon learning of the overcharge on what was Mr. Collier’s unauthorized personal device.”

Collier was charged with grand theft, using a skimming device, and was issued a $10,000 bond.