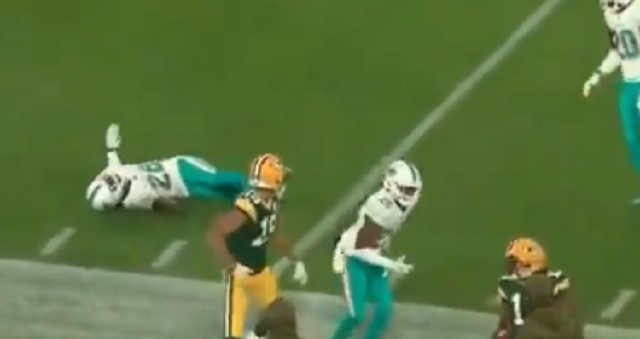 During today’s Dolphins-Packers game, Miami cornerback Bobby McCain was forced to leave the game with a head injury, after he was crushed by a vicious blindside block delivered by Packers wide receiver Equanimeous St. Brown.

Here's the block by St. Brown.pic.twitter.com/Lx0az9EuX0

Brown was flagged for an illegal blindside block on the play, but Dolphins fans want the league to step in and suspend him for the hit.

That hit on Bobby McCain deserves an ejection.

St.Brown should b thrown out of the game for that hit.

What a horribly cheap blindside hit by St. Brown on Bobby McCain, who is down. Flag has been thrown, but that's the kind of bush league play that should result in an ejection.

That Bobby McCain hit was not pretty. St. Brown deserves an ejection.

St.Brown should be ejected and fined but since the NFL only cares about players on offense's safety he'll be allowed to keep playing. Ridiculous https://t.co/L4G8LbPZET

Others believe the block by St. Brown was clean.

I do feel bad for Bobby McCain, but that was a clean hit by St. Brown. Shoulder to chest. Vicious, yes, but also the #NFL. #MIAvsGB

I do feel bad for Bobby McCain, but that was a clean hit by St. Brown. Shoulder to chest. Vicious, yes, but also the #NFL. #MIAvsGB

Not a fan of that flag at all. That was a clean hit. St Brown was trying to get Adams free. Not his fault that guy never saw him coming…