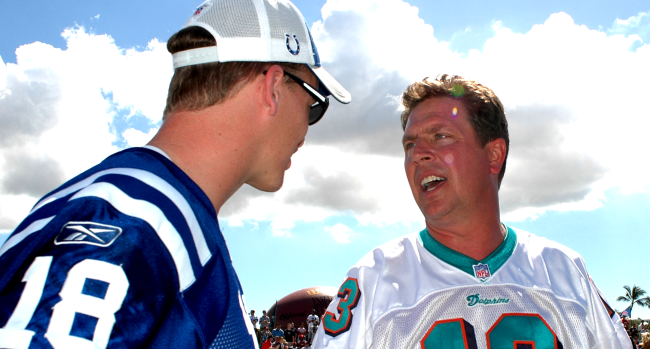 Back in 1998, there was some speculation about who would be the first player taken in the NFL Draft: Peyton Manning or Ryan Leaf? The Indianapolis Colts ended up selecting University of Tennessee quarterback Manning with that pick and the rest, as they say, is history.

Manning went on to win five NFL MVP Awards, two Super Bowls, become a member of the NFL 2000s All-Decade Team, the NFL 100th Anniversary All-Time Team, and this year was inducted into the Pro Football Hall of Fame.

Another team that could have used a quarterback during the 1998 NFL Draft was the Miami Dolphins, then coached by another NFL Hall of Famer, Jimmy Johnson.

Johnson was entering his third year as the coach of the Dolphins having gone 8-8 and 9-7, losing to the New England Patriots in the AFC Wild Card Game.

His quarterback, yet another Hall of Famer, Dan Marino, has just completed his 15th season in the NFL and would go on to play just two more years before retiring.

So the Miami Dolphins could have been a real nice fit for Peyton Manning. He could have learned from one of the all time great quarterbacks for a year, then, instead of Damon Huard taking over for Marino when he got injured and eventually retired after the 1999 season it would have been Manning.

So when Jimmy Johnson admitted on The Dan Le Batard Show with Stugotz last week that there was a chance that he could have drafted Peyton Manning in 1998, Dolphins fans were more than a little shook.

When asked to share more details about what happened, Johnson would only say, “Well, that’s all the details I can give you. I think I probably said too much already.”

When Miami Dolphins fans, who haven’t experienced a Super Bowl victory since 1973 and haven’t won a playoff game since the year 2000, found out this tidbit of news about Peyton Manning and the 1998 NFL Draft, they were understandably a little upset. Especially when they took a look at who the Dolphins drafted that year and realized the only real key player they would have lost out on would have been Patrick Surtain.

Jimmy Johnson saying he could have traded for Peyton Manning in the 98’ draft and had Marino (37) mentor him is NOT the news I was looking for today…..pain

Whatttt??? Where did you see this?!?! pic.twitter.com/cQDmbf2eOk

Miami has cornered the market on not pulling the gun on good QBs. Post Marino that is.